NeNe Leakes is so grateful that her husband Gregg beat cancer in 2019. She posted a heartfelt early birthday message to him as he’s about to turn 64.

NeNe Leakes and her husband Gregg have definitely had their ups and downs. But she’s so glad to have him in her life after he successfully beat the colon cancer that he was diagnosed with in May of 2018. The Real Housewives of Atlanta star took to her Instagram on Aug. 16 to write him a birthday tribute, even though he doesn’t turn 64 until Aug. 18. “Ain’t nothing like the love of a Leo man! My life would be empty without you in it Gregg! You have taught me that pleasing everyone is impossible but pleasing you is a MUST 🤣 HAPPY BIRTHDAY GREGG! I LOVE YOU FOREVER,” the 51-year-old wrote next to a series of photos of her husband.

“Everybody go wish my hubby a happy healthy birthday….fun fact: there are 7 RHOA men. 5 of them are Leo’s. Can you name all 5?,” she added. NeNe got her wish and fans flooded the comments with birthday messages and several even played along with her Leo game. “Gregg, Todd, Marc, Dennis, and Mike… at least I think I got it right,” one fan wrote of the RHOA Leo men, while a more confident user posted “Gregg, Todd, Marc, Dennis, & Mike Hill 💕🦁♌.”

A fan named Sholonette who is a Sagittarius like NeNe commented “My husband and I are Sag (me) and Leo…they might be the only ones who know how to love a Sag women 🔥🔥🔥🔥.” A fan named Jamie agreed, writing “Yes sag & Leo works soo good. Leo’s are the best ♥️.” Another added, “Takes a #Leo to Handle powerful women 🙌🏾 .” 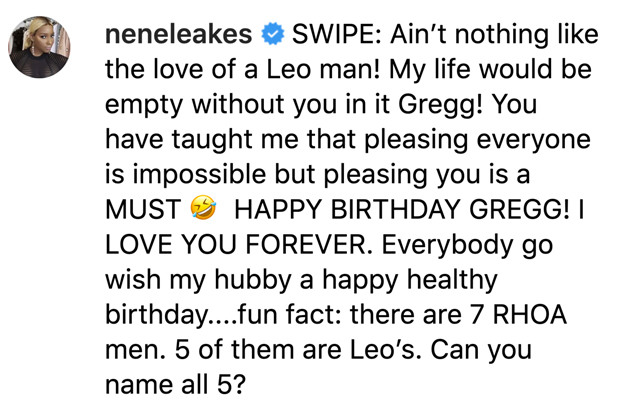 The main photo NeNe used was a black and white photo of Gregg where he appeared somber looking. For some fans, until they clicked in and read the message they were scared he had passed away! “Don’t scare me like this, lawd I thought something happened to him by the picture lolll😭” one person commented. “Chile I got on IG and thought Gregg had died 😩😩 #HBD,” another user wrote with a RHOA fan adding “Lawd i got scared …. glad it’s his bday.” After Gregg’s yearlong cancer battle that was well documented on the show, fans had good reason to be concerned! Fortunately on May 13, 2019, NeNe announced Gregg had been declared cancer free after undergoing grueling chemotherapy treatments.