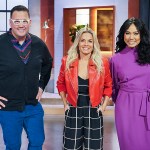 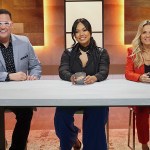 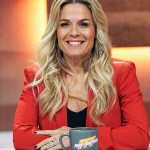 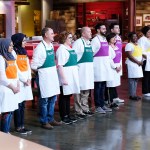 Cat Cora took her ‘Iron Chef’ expertise to a new ABC show — ‘Family Food Fight!’ Ahead of the season finale, she looks back on the experience.

Chef Cat Cora has a ton of experience on TV cooking competition series, and now she has taken her talents to ABC’s Family Food Fight along Ayesha Curry and Graham Elliot. Before tonight’s season finale, where one lucky family will win it all, Cat spoke to HollywoodLife.com EXCLUSIVELY about the special show. “It’s people from all walks of life coming together with their families and they are just amazing home cooks. They have a lot of passion and dedication cooking at home with their family — they are not professionals,” Cat explained. “I think what sets this show apart from other cooking food shows and competition shows is that instead of individuals, like Iron Chef or Top Chef, these are families that come together in a home.”

The former Iron Chef winner continued, “We take them out of their homes and put them at center stage, and give them “Cook By The Clock” challenges to test their abilities in the kitchen — not only as a family, but also their cooking skills, their communication skills, their ability to work together as a team. It’s a great show, it’s a family show, a feel good show and it’s perfect for these times in this environment right now.” On tonight’s finale episode, which airs on ABC at 9 PM ET, the Maniya family of Chicago, Illinois will face-off against the Nichols family of Paulding County Georgia.

The Maniya family is made up of sisters-in-law Azeema, Fatima and Kiran, while the Nichols is Chris, Tammy and Eddie — a husband, wife and brother. What started as eight families in the beginning has been widdled down to the final two, to be judged by Cat, Ayesha and Graham! “You get a little bit of drama, you get some tears and joys, the happiness. You get all emotions because you are cooking, emotions run really high in various ways,” Cat warned. “These folks came from parts of the world and they came together to cook and they never have been out of their home kitchen to cook competitively. Ever. I think that we have really pushed them to their limits in a great way and it really shows on camera.”

In addition to Family Food Fight, Cat’s upcoming cookbook with be released in the Spring, and she is continuing to tend to her more than 18 restaurants around the world, including her award-winning spot in Singapore, Ocean by Cat Cora. Plus, the star chef revealed she’s planning to cross over into acting, saying, “It’s something that I’ve been wanting to do for a long time, and I think I’m in a really good place right now to start doing that.”

Be sure to tune into Family Food Fight tonight, August 15, at 9 PM ET on ABC!