Scott Disick is ‘running for father of the year’ after building his kids a $100,000 playhouse on the August 11 episode of ‘Flip It Like Disick’! The lavish new structure has hardwood floors, large windows and stunning French patio doors.

Scott Disick, who is known for his over-the-top taste in cars, houses and fashion, has seriously outdone himself this time. The self-proclaimed Lord, 36, debuted his new $100,000 present for sons Mason, 9, and Reign, 4, and daughter Penelope, 7, on the August 11 episode of his new show, Flip It Like Disick. — A stunning “playhouse” that appears to be equivalent to a small loft space.

The new space, which is set in the backyard of his ex Kourtney Kardashian‘s home as seen in the episode, features amazing views. It also includes top-of-the-line hardwood floors inspired by a structure Scott saw in Mexico, he said. Large windows cover the side of the playhouse, as well as two brown French-style doors that open up to a small patio. Inside, there’s a ladder to what appears to be an above floor, as well as toys and a small couch.

“This playhouse obviously isn’t going to be an ordinary playhouse. It’s definitely going to be something unique and different,” Scott tells Kourtney, 40, during the episode when he goes to her home to show her the space. “I wanted to build the kids this guest house, like a tree house but more luxurious,” he tells the mother of his kids, who is a bit taken by surprise. “Like cool with modern fixtures with hardwood floors.” 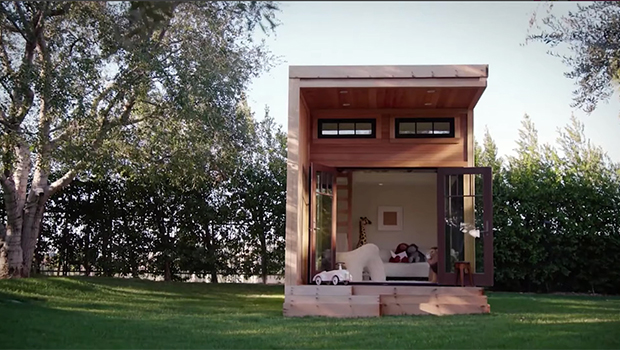 Scott Disick’s $100,000 playhouse he built for his and Kourtney Kardashian’s kids, Mason, Reign and Penelope, as seen on his new show, ‘Flip It Like Disick’. (Photo credit: E!)

“I was inspired by a picture I saw in Forbes magazine of a really cool structure I saw in Mexico,” Scott said of the inspiration behind the playhouse. “One of the things that drew me to this hotel in Baja was all the different woods that were being used in one. I want to basically do this same thing in this playhouse in the backyard.”

After the structure was completed, Scott was more than satisfied, admitting that he “couldn’t be happier” with the outcome. “Everything came out great,” the reality star said. “The ipe wood is perfect. The recess lighting over the little windows the loft space is really cool. Honestly, it’s pretty amazing altogether.”

“Running for father of the year over here,” Scott tweeted after the episode aired. He added, “Excited to build my kids the most luxurious playhouse ever… I’m ready to move into it.”