Kourtney Kardashian is one natural woman! The Poosh founder, 40, took to the lifestyle website’s Instagram on Tuesday to post a new photo [SEEN HERE] of herself in a cut-out, black one-piece swimsuit. In the photo, which was taken on a boat during her recent European vacation, fans noticed visible stretch marks on her left thigh.

“Thank you so much for not editing out your stretch marks!!” one user commented on the photo. Kourtney replied with a smiley face emoji, admitting, “I love my little stripes.” The comment was followed by an influx of other supportive messages from fans who praised the mother-of-three for embracing the skin she’s in. “I love the fact that you let your stretch marks show! Proud, hot Mama!!”, another fan wrote. “Oh wow not air brushed. You can actually see her stretch marks and this is what a real body looks like! I love it,” one user gushed.

Kourtney, along with sons, Mason, 9, Reign, 4, and daughter Penelope, 7, have been traveling together since mid-July. First, the family explored Costa Rica, where they spent time a boat and took in the sights and sun. Next, they traveled to Italy where they spent more time outdoors and indulged in the delicious Italian foods the country has to offer. Kourtney shared photos of herself and the kids in numerous cities including, Sardegna and Portofino. 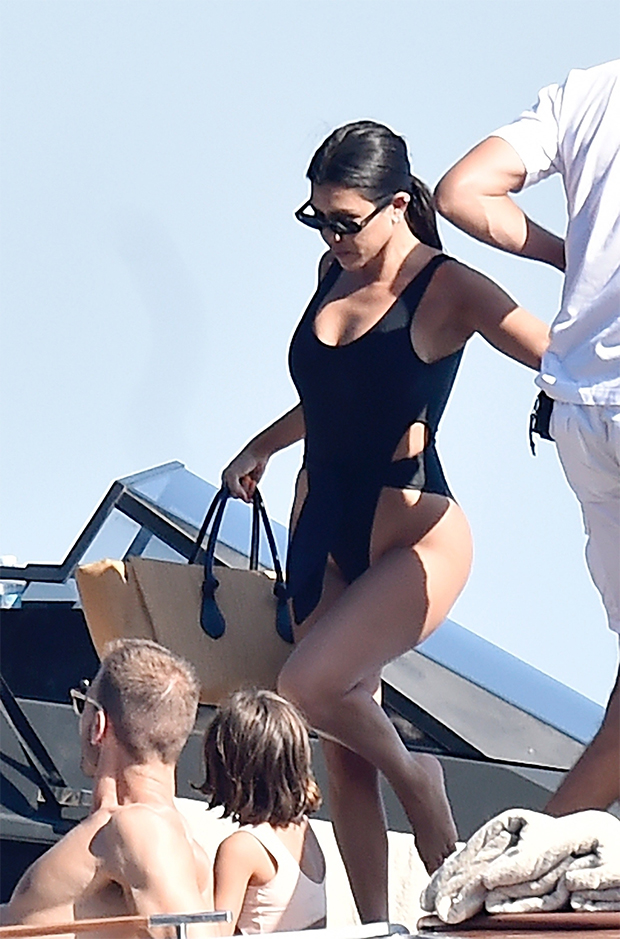 Kourtney Kardashian vacationing with her kids in Europe wearing the same swimsuit as seen in her ‘Poosh’ photo, mentioned above. (Photo credit: Backgrid)

While the trip is certainly for pleasure, it appears as though Kourtney is doing a bit of content cultivating for Poosh. She announced a new collaboration with Aquis, who she teamed up with to design a custom, limited-edition leopard hair turban that reduces breakage and damage.

Kourtney recently opened up about Poosh, and recalled a time in her life when she began questioning what her “thing” is after her sisters began branching out into their own projects and brands. Fans of the famous family will know that Kylie Jenner has her Kylie Cosmetics company, Kim Kardashian has her new shape-wear line, along with KKW Beauty, and Khloe Kardashian heads her own athleisure brand, Good American.

“We used to do all of our projects together, so when we started splitting up and doing our own, I think I felt like, ‘Well what’s my thing?'” Kourtney said in an interview with Glamour (published in August), referencing her sisters. “Everybody would put this pressure on me, even though I really just wanted to focus on being a mom. I didn’t want to take on something else. But once I really took the time to do it, once I figured out when the time was right for me — and that it really fit into my life without overwhelming me — then it became fulfilling.”

Kourtney went on to explain her purpose behind launching Poosh. “… I just wanted to have a space where I could open up a conversation — where instead of being judgmental or being like ‘this is the way and that’s it,’ the site offers things to learn about,” she said. “…I’ve learned so much from starting Poosh, even on topics that I may have wanted to know about but didn’t have the time to research. We’re finding out so much and are able to share that.”