Gigi Hadid and Tyler Cameron are still going strong with whatever the status of their relationship may be! The ‘Bachelorette’ star and the model were all smiles while walking around NYC with friends on August 13.

Gigi Hadid and Tyler Cameron‘s rumored romance continues to heat up on the east coast. The supermodel, 24, and the recent Bachelorette runner-up, 26, were spotted walking around New York City together with a few friends on Tuesday night after leaving Le Turtle restaurant. Gigi and Tyler were all smiles in a new photo, which showed the pair in mid-conversation.

The two were dressed casually for their night out together. Gigi rocked loose, ripped jeans and an oversized green t-shirt with white pointed heels. She carried a small handbag and wore her hair up in a bun. Meanwhile Tyler donned fitted blue jeans and a white tee with matching sneakers.

It’s unclear where the rumored couple and friends were headed after dinner. However, if the night was over after that, it’s possible Tyler and Gigi headed to her place since he’s already spent the night at her NYC apartment before. Either way, these two seem to be enjoying getting to know each other. 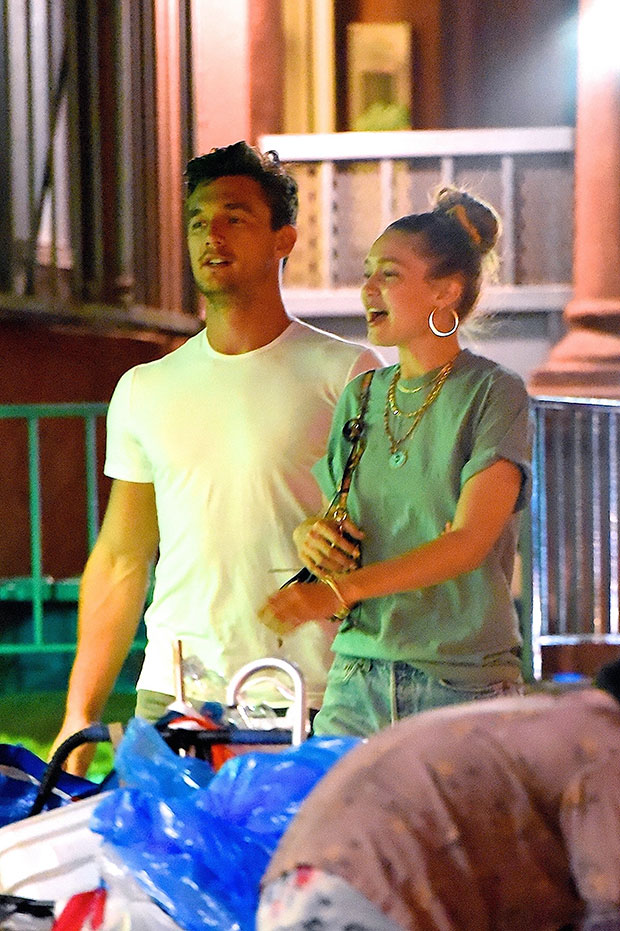 Tyler and Gigi’s latest outing comes after they were seen together at Frames Bowling Lounge in the city with a group of friends. An eyewitness at the venue told HollywoodLife, “You could tell they were interested in each other and were being very flirtatious throughout the night.” The source continued, “They were playfully teasing each other, kept giggling, and they couldn’t stop smiling. It definitely seemed like they had a great time in each other’s company and didn’t take their eyes off each other despite hanging with a group of their friends.”

Gigi and Tyler were first spotted out together at Soho House in Brooklyn on August 4, shortly after fans went wild over the fact that they followed each other on Instagram at the end of July.

Just days before their Soho House date, Tyler was photographed leaving former Bachelorette Hannah Brown‘s place in Los Angeles after spending the night there. They grabbed drinks beforehand after Hannah publicly asked Tyler out following The Bachelorette finale… where she broke things off with her (brief) fiancé, Jed Wyatt. Fans of the show will know that Tyler and Jed were the final two suitors vying for Hannah’s heart.