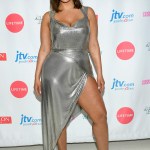 Ashley Graham is pregnant! The model and husband Justin Ervin are expecting their first child together, they revealed in a sweet video on Instagram on August 14. See their adorable announcement!

Ashley Graham is going to be a mother! The model, 31, and husband Justin Ervin announced the good news on social media on Wednesday morning with the cutest video announcement. Ashley and Justin turned the camera on themselves and zoomed out to show the model’s baby bump after pretending to focus the video. “Surprise!” they yelled as Ashley rubbed her belly. The expectant parents then shared a kiss to seal the announcement!

“Nine years ago today, I married the love of my life. It has been the best journey with my favorite person in the world! Today, we are feeling so blessed, grateful and excited to celebrate with our GROWING FAMILY!” Ashley captioned the video. “Happy anniversary, @mrjustinervin ❤️ Life is about to get even better.” This will be the couple’s first child together.

The Sports Illustrated stunner previously opened up about motherhood in an interview published in June, where she explained that the topic of race is something she wants to talk openly about with her future kids. “I want to know as much as I can as a white woman who is going to be raising black children,” she told Allure. “We’re going to have to have that conversation of ‘Mommy’s white, Daddy’s black,’ and I want to be prepared.” Ashley also stressed how important it is to “read books, have conversations and educate yourself.” While the body positive activist spoke of motherhood during the interview, she did note at the time that kids were “just too far down the road for me to even think about.”

Nine years ago today, I married the love of my life. It has been the best journey with my favorite person in the world! Today, we are feeling so blessed, grateful and excited to celebrate with our GROWING FAMILY! Happy anniversary, @mrjustinervin ❤️ Life is about to get even better. 😘

Ashley also discusses how her own mother helped her to grow up as a confident young girl in her autobiography, “A New Model”. In the book, she talks about how parents are a child’s first role models. Ashley goes on to explain that there needs to be more dialogue between parents and children when it comes to body image, so confidence can be instilled in kids at a young age. We have no doubt she’ll take that course of action when her little one enters the world!

Ashley and Justin, who met at church in New York City, will celebrate their 10-year wedding anniversary in August 2020. Justin popped the question in 2009 with a custom diamond ring.