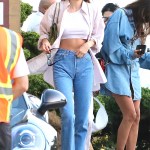 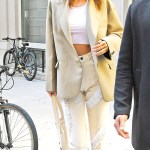 Kendall Jenner looked gorgeous in her latest look. She wore a white crop top with a black and khaki jacket and pants for dinner with Caitlyn Jenner. The duo’s meeting came while Kylie and Kris party it up in Italy.

Kendall Jenner met up with her dad for dinner! The model, 23, stunned in a white crop top under a black and khaki jacket for the meeting at Nobu in Malibu on Aug. 8. She also wore jeans with the same color-blocking as her coat. Kendall finished off her casual ensemble with a bracelet and small handbag.

The Keeping Up With The Kardashians star was joined by Caitlyn Jenner for some sushi. Outside the venue, the father-daughter duo shared a warm hug, with Caitlyn looking incredibly happy to spend some time with her kid. Caitlyn opted for a black belted dress for the occasion.

Noticeably missing from the meeting was Kendall’s sister, Kylie Jenner. We can totally forgive her for that though – she’s been off celebrating her 22nd birthday in Italy. The Kylie Cosmetics mogul turns 22 on Aug. 10, so she’s been getting a head start on reining in the new year by living her best life on a massive yacht in the Mediterranean with Travis Scott, Sofia Richie, Scott Disick and Kris Jenner. She also brought along her baby girl, Stormi Webster.

Kylie appeared to be enjoying herself in Capri. The billionaire was spotted on a romantic dinner date with her boyfriend just hours before her big sis spent some time with their dad. Kylie also got her PDA on with Travis as the two were spotted kissing after leaving the restaurant.

While Kylie has been spending time with her loved ones in Italy, she also made sure to see Khloe Kardashian before she embarked on her trip. The pair teamed up to pound back over nine shots each while doing full faces of makeup for an epic tutorial. Looks like Kylie’s last few moments of being 21 will be great ones!