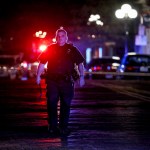 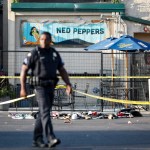 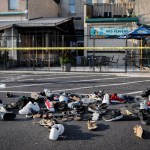 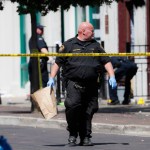 President Trump made a baffling gaffe during his speech condemning the two mass shootings this weekend, mistakenly saying that one, which killed nine, happened in Toledo, Ohio — not Dayton.

Holy Toledo, where do we begin? President Donald Trump went off script during a prepared speech about the back-to-back mass shootings this past weekend, and major gaffe that was shocking, even for him. After speaking about the horrific shooting in Dayton, Ohio on August 3, which left nine dead and dozens injured, the president mistakenly said it happened in Toledo, a city over 150 miles away. “May God bless the memory of those who perished in Toledo, may God protect them. May God protect all of those from Texas to Ohio. May God bless the victims and their families,” Trump said from the White House at the end of his 10-minute speech. You can watch Trump’s gaffe in the video below.

Suspected gunman Conner Betts, 24, opened fire in Dayton’s nightlife district on the evening of August 3 after driving to the area with his sister, Megan Betts, 22. The siblings apparently separated, and while Megan went off with a male companion, Connor donned body armor, earplugs, and a face mask before opening fire in a crowd with an AR-15-like assault weapon with magazines containing 100 rounds. The shooting only lasted about 30 seconds, but the gunman killed nine people and injured 27 others. Megan was one of the first to die. Police shot and killed Connor. Trump was also criticized for reading his speech off a TelePrompTer, which some viewed as disingenuous.

“The President of the United States just read an empty, insincere speech off a teleprompter, completely ignored his responsibility, gave no solutions, and even named the wrong city where a slaughter took place and pundits are falling over themselves to give him credit,” one person tweeted following the speech. “Pro tip: When Trump can only read from a teleprompter and tweet from his country club, the proper response to these massacres from any politician is to speak from your heart and with sincere honesty. Don’t hold back. Speak your truth,” tweeted another.

Trump, struggling with a bad case of what appears to be dry mouth, falsely claimed the Ohio mass shooting took place in Toledo. (It happened in Dayton.) pic.twitter.com/dzOcsIV5ox

Hours before the Dayton shooting, a gunman killed 21 people and wounded dozens more at a Walmart in El Paso Texas, which Trump condemned in the same speech. The alleged shooter, Patrick Crusius, 21, apparently wrote a racist, anti-immigrant manifesto, claiming that a Latino “invasion” was upon us. He was arrested and charged with capital murder. Federal agents labeled the massacre as domestic terrorism. Both mass shootings came a week after a gunman, Santino William Legan, 19, opened fire and killed three at the annual Garlic Festival in Gilroy, California. The gunman then took his own life.