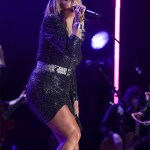 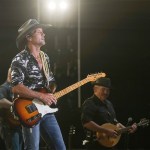 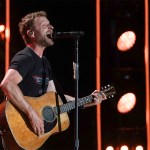 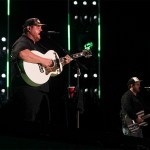 CMA Fest wouldn’t be complete without the one and only Miranda Lambert, and she didn’t disappoint when she hit the stage at the annual music festival.

Miranda Lambert absolutely slayed the stage when she performed at the CMA Music Festival, and it aired during a TV special on August 4. The singer looked fabulous in a sparkling black mini dress for the occasion, which she paired with a silver belt. The long-sleeved ensemble covered her up on the top, but the short hemline allowed Miranda to show off her tanned and toned legs. During the TV special, Miranda performed a song called “Locomotive,” which will be featured on her upcoming album.

In addition to performing by herself, Miranda hit the stage with her band, Pistol Annies, and their rendition of “Sugar Daddy” aired on television. When CMA Fest actually happened earlier this summer, Miranda also sang “Kerosene,” “Automatic,” “Gunpowder & Lead,” “Mama’s Broken Heart,” “White Liar,” and then “Hell on Heels” with Pistol Annies. The event took place from June 6-9 in Nashville, with the TV performances taking place at Nissan Stadium. Kelsea Ballerini and Thomas Rhett served as hosts for the third year in a row.

It’s been almost three years since Miranda released her last solo album, The Weight of These Wings, but she promised fans that her next record is on the way. She recently released the record’s first single, “It All Comes Out In The Wash,” in July, along with the studio version of “Locomotive.”

2019 has been a big year for Miranda, as she got secretly married to her new husband, Brendan McLoughlin, in January. After a few months of privacy, they made their red carpet debut at the ACM Awards in April, and have not been shy about flaunting their love ever since. This will certainly give Miranda some great content for her new album!