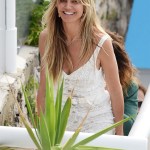 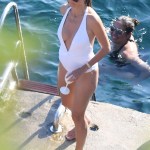 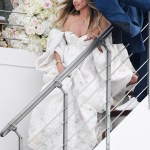 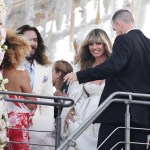 Heidi Klum was a vision in white on her wedding day, Aug. 3! The model stunned in a full length, off the shoulder dress at her Capri, Italy nuptials to musician Tom Kaulitz.

Heidi Klum, 46, looked like she stepped out of a fairytale on her  Aug. 3 wedding day! The model looked breathtaking in a floor length, strapless gown as she made her way down the aisle to say “I do” to Tom Kaulitz, 29. The white dress featured an empire waist and dramatic long sleeves of billowing fabric that went halfway down her dress in a cape-like fashion. She kept her hair windswept and natural, wearing her sandy locks down but added a white veil. The couple said their vows aboard a yacht off Capri where white flowers and pink roses adorned the stairs as Heidi made her way to her groom.

Heidi’s third marriage was what dreams are made of. After secretly marrying Tom earlier this year, the couple had an official ceremony in Capri, Italy, and it looked breathtaking. The former Project Runway host was previously married to stylist Ric Pipino from 1997-2002, before she wed singer Seal in 2005. Their divorce was finalized in 2014, two years after she filed. This is the second marriage for the Tokyo Hotel guitarist. He was previously married to Ria Sommerfeld, an entrepreneur, for a short time before they split in 2016.

Although the newlyweds have a 16-year age gap, Heidi isn’t fazed. The model, whose previously slammed ageism within her career, sees no issue with having a much younger spouse. “Lately, I’m being reminded more about my age by people other than myself,” Heidi told InStyle in July 2018, following her engagement. “My boyfriend is many years younger than me, and lots of people are questioning that and asking about it. That’s really the only time when age seems to be shoved in my face and I have to give an answer for it,” she said. “I don’t really think about it that much otherwise. You have to just live a happy life without worrying too much about what people think because worrying is only going to give you more wrinkles.”

Heidi has four kids (three with Seal and one with Italian businessman Flavio Briatore) — daughters Lou, and Leni, and sons Johan, and Henry. And, they love her new husband! “The kids adore Tom,” she previously told UK’s Closer magazine, adding that they were looking forward to the wedding. Congratulations to the newlyweds!