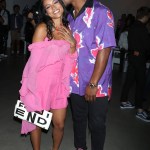 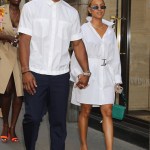 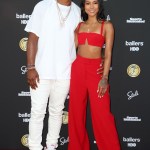 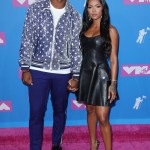 Talk about being ‘offsides’ with some ‘illegal contact.’ In a case of ‘TMI PDA,’ ex-NFL star Victor Cruz’s hand was all over Karrueche Tran’s butt, and he had no shame in feeling up his girlfriend in public.

It’s a good thing that Victor Cruz, 32, doesn’t play for the New York Giants anymore because he would have been hit with a penalty for “holding,” “illegal touching” and/or “ineligible man downfield” after grabbing a handful of Karrueche Tran’s booty. Kae, 31, was busy shopping at KITH on Aug. 1 when her man clearly couldn’t help himself. While admiring his girl in the mirror, Vic committed a “Neutral Zone infraction” while getting “offsides” with his hand. However, judging by the grin on Kae’s face – and the way she flicked her tongue – Victor wasn’t going to get hit with “Unsportsmanlike Conduct.” In fact, she seemed to be digging it!

Since Victor began dating the Claws star in 2017, life has been great for both of these two. Kae even said so. “It is amazing to think where I was four years ago to where I am now, and it pushes me to want to do more and become better, and the long term goal for me is acting and getting on the big screen,” she told HollywoodLife EXCLUSIVELY in May 2019. By mentioning “four years ago,” she was throwing some not-so-subtle shade at her ex, Chris Brown, 30, who she was with until discovering he had fathered a child (Royalty Brown) with another woman.

“I feel like I am the rose that grew from concrete, it’s that little bud that starts and keeps growing and growing,” Kae also told HollywoodLife, “and you learn that the world is your oyster and you can continue to grow with staying focused and hard work!” She certainly has been “blossoming” over the past four years. She’s on a critically-acclaimed show, and she has a man who literally can’t keep his hands off of her. “She’s very much the one for me,” Victor said in Oct. 2018, almost hinting that a proposal was in the near future for these two. “I love her very much. We’re still growing and learning things about each other as we’re going along.”

Though, it hasn’t always been sunshine and butt-grabs for these two. Chris won’t leave Kae alone, even after she was granted a 5-year restraining order against Breezy in 2017. Chris apparently left a passive-aggressive comment under a photo Vic shared to his Instagram in June. “No shade boo, BUT PLEASE STYLE HIM. He looks like he’s shopping off the manikin and trying to bargain with the sales manager.” Chris later claimed he was hacked and that shady comment didn’t come from him.