Katherine Schwarzenegger is loving newlywed life! She paid homage to her new hubby, Chris Pratt by wearing gold ‘CP’ earrings on July 31. The author was spotted with her new hardware while leaving a workout class in LA.

Katherine Schwarzenegger, 29, is living her best life as a newlywed. The author was photographed while leaving a yoga class on Wednesday, and in one closeup shot (seen below), she can be seen wearing “CP” earrings, which obviously symbolize her husband Chris Pratt‘s initials. Katherine was all smiles while out and about in LA. She was dressed in all-black workout gear, including her sunnies, while she carried a thermos and a baseball cap.

This appears to mark Katherine’s first time out with her “CP” jewels.  It’s unclear if the daughter of actor Arnold Schwarzenegger, had gotten two additional ear piercings (she already has two ear piercings) to fit her new gold hardware. However, she’s never looked happier after her June nuptials.

Katherine and Chris, 40, wed in an intimate ceremony in Montecito, California on Sunday, June 8. The Guardians of the Galaxy actor’s son, Jack, 6, along with the pair’s families and friends were all present at the ceremony. The two later honeymooned in Hawaii together. 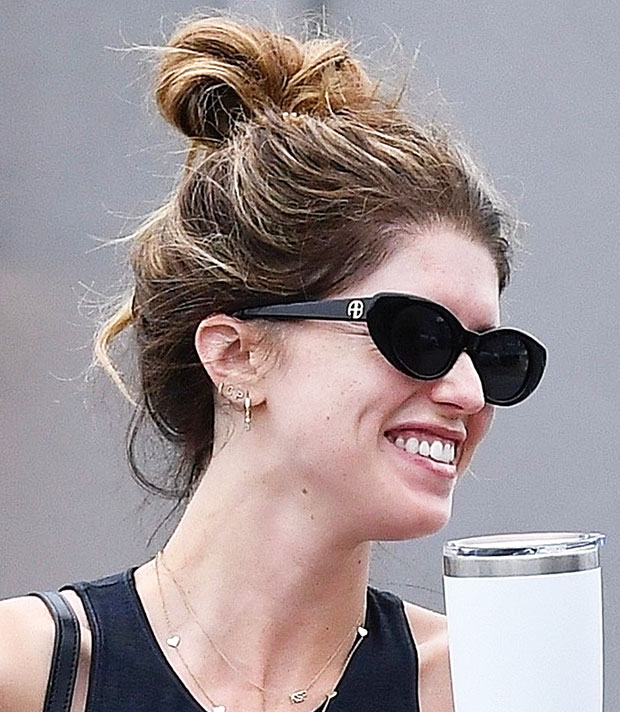 Just before Katherine’s post-yoga session, she was photographed on a date night with Chris on July 29. The husband and wife held hands as they were spotted leaving a movie theater in LA after catching a showing of Quentin Tarantino’s box office hit Once Upon a Time in Hollywood.

Chris and Katherine, who announced their engagement in January, began dating in June 2018 around Father’s Day. While it’s unclear as to how they exactly got together, reports have claimed that it was Katherine’s mother, Maria who introduced them. This marks Katherine’s first marriage, and the actor’s second. Chris and Anna announced their split on August 6, 2017 in a joint statement on Facebook. Their divorce was finalized in October 2018, and they’ve gotten along wonderfully, while co-parenting together.