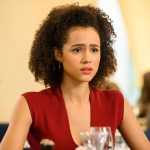 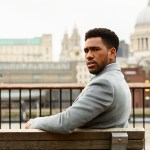 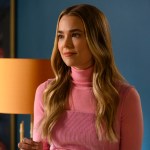 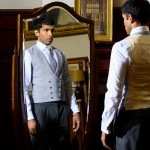 ‘Four Weddings and a Funeral’ is making a comeback with an all-new limited series. HL spoke EXCLUSIVELY with Brandon Mychal Smith about the role of Craig and this new and ‘vibrant’ iteration of the beloved movie.

Four Weddings and a Funeral will debut its first four episodes July 31 on Hulu. New episodes will then be released weekly. The series follows a group of four friends — Maya, Craig, Ainsley, and Duffy — who reunite for a wedding in London. A bombshell at the altar is just the beginning of a year that’s full of romance, heartbreak, and adjustments. Brandon Mychal Smith plays Craig, the charismatic and funny investment banker, alongside Nathalie Emmanuel, Rebecca Rittenhouse, and John Reynolds.

Craig will be encountering life-altering changes over the course of the series, one that happens right away in the first episode. HollywoodLife sat down EXCLUSIVELY with Brandon to talk about the exciting role, one that allows him to flex both his comedic and dramatic muscles. He teases Craig’s “roller coaster” of a journey and how the season ends. Get ready. Brandon admits that “everybody’s going to cry” when everything is said and done.

How did this role fall into your lap? Because you’ve got so many things going on.
Brandon Mychal Smith: It’s a blessing. So when I got the call about this, I was instantly intrigued. I think there was a general excitement about it with my team and everybody over at Hulu and MGM. I had done a project with MGM prior. It was a good relationship there. So instantly going into it, there was just so much excitement. I knew that this was going to be the role of a lifetime and just a great character. You know, so much character and color and dynamism to the story. This guy is a very aspirational character. I think I see a lot of my qualities in him, and I would love half the apartment that he has in the show. You guys are going to love his apartment. It’s unreal. Craig has that lifestyle that I think every guy dreams of — hot wife, investment banker, very smart, charismatic, funny, the life of the party. I think you really get to see those colors and those tones in such a vibrant, unique way throughout the life of the series.

This is taking the basis of the movie Four Weddings & A Funeral, but with new characters and new stories. So who is Craig? What can you sort of tease about the way he enters the story?
Brandon Mychal Smith: Craig is Maya’s best friend, played by Nathalie Emmanuel, and he’s also a long-time friend of Ainsley as well, who is played by Rebecca Rittenhouse. The way Craig enters the story is very unique in the sense of, you’re not expecting his relationship to get in the way of anything, and it does because of a surprise that he finds out in the first episode, which becomes a life-changing surprise. Instantly, you’re thrown into this roller coaster. It could happen to anybody, this kind of situation. But I think, when you meet this crossroads, when you have an opportunity like this, you have to make the best of it. I think Craig is a little bit scared. He’s very fearful of the reality in which he has to deal with now. I think that his journey is something that a lot of people will be able to find similarities in their world, where something comes out of the blue and you’ve just got to make the best it. I think Craig’s humor and his ability to go with the flow really allows him to be the best candidate for this particular situation. You end up seeing this journey of a young man becoming a grown-ass man.

Why do you think romantic comedies are making such a big comeback right now?
Brandon Mychal Smith: I think these kinds of projects, rom-coms, are making such a big comeback now because of the comfortability of it. You know, I think there are so many heavy shows out there, and those are awesome, but I think a show like this allows you to sit back on the couch and have a glass of wine and build that camaraderie that we are showing on the screen. It makes you think about your relationships and your friendships, and how you can make them better, and how much they matter to your wellbeing. I think at the end of the day, we are all searching for the same thing, which is love, family, and good health. I think this show truly gives a lens into that world in such a unique, fun, spirited way, but at the same time, takes you on these twists and turns and truly becomes a guidebook to you managing your relationships and shows you how to deal with life.

Even though this is a separate story, will there be Easter eggs for fans of the movie?
Brandon Mychal Smith:  Oh, tons. I mean, I think one of the greatest Easter eggs is Andie MacDowell coming in and playing Ainsley’s mom. And there are more surprises that you guys are going to love. Then we went and got legends like Dermot Mulroney. Funny enough, this is me and Dermot’s third project together in the last three years. So me and him, we feel like we’re literally brothers now. He’s supported me in such great ways throughout the life of our journey together. I’m such a big fan of his work, and I think there’s going to be a lot of people who see his performance in this and again are blown away. I mean, every time he just gets better and better and better. And he’s so handsome. That Dermot’s so damn handsome.

This is a comedy as well, but there’s a chance to flex some drama muscles. What’s that like for you? Because you’re known for your comedy.
Brandon Mychal Smith: Yes! You know, I was really excited about this character because he is so layered. Like I said, there is a big discovery that Craig makes in the first episode that changes his life and changes the lives of everyone around him in the most dramatic way. Dealing with that becomes this emotional roller coaster that I think Craig, being the bachelor that he was, being the rock star that he was, now that he has this new responsibility, this new weight on his shoulders, you’re able to see the internal Craig that is a sensitive, caring person. But at the same time, you also get to see Craig become vulnerable. I think we’ve all been in that place in our lives where we’ve been vulnerable from uncontrollable circumstances. The way that he deals with it really, really becomes this journey that the audiences are going to be sitting on the edge of their seats watching and enjoying and crying with Craig and the entire cast.

This could have easily been another movie. Why do you think it was the right choice to make this into a TV show?
Brandon Mychal Smith: The TV series avenue for this particular genre of rom-com allows it to breathe. It gives you more of what I think every great rom-com is, which is a journey. You’re able to see this elongated journey but in such a more vibrant and full way. So I like to kind of think we’re like the Harry Potter of rom-coms. You can’t get enough.

Had you watched the original before you started working on this?
Brandon Mychal Smith: Yes. I did. I had watched the original. I am a big fan of it. But let me tell you, we put the spice and the habanero on this new iteration of Four Weddings & A Funeral in such a unique, vibrant, millennial way. I think people are going to dig it

Talk a little bit through that process of adapting it and updating it for today.
Brandon Mychal Smith: The update process was something that we were the most excited about, collectively. I think from Mindy to Tracy, to all the producers involved in this, it was about providing that diversity, right? Seeing multicultural relationships, seeing multicultural friendships, but also seeing the strength and the fortitude of these very diverse characters, in their own respective worlds and come together on a united front. But most importantly, what I’m excited is that I think this show is the true representation of what the world will be, what the world is, what the world can be, which is this beautiful melting pot of very different, vibrant, colorful characters that each have a story that’s worth telling.

I know Mindy mentioned a potential season 2. Are you down?
Brandon Mychal Smith: You know, I’m always open to doing anything that involves Mindy anytime, anywhere, any place. She is an outlier. She is a legend. She’s a creative genius, and I hope I can continue to learn from her and grow with her.

I know you can’t spoil it, obviously, but there will be four weddings and the funeral in this. We know what happens in the movie, but this is so different. Is there anything you can tease about that aspect of it?
Brandon Mychal Smith: Only thing I can say is, you won’t see it coming. It’s a tearjerker. Just get your Kleenex ready. When this person goes, everybody’s going to cry. Everybody.

London is such an iconic character in Four Weddings & A Funeral. What was that like filming there and embracing that culture?
Brandon Mychal Smith: London is such a big character in the show and I think it’s one of the aspects that really reeled me in from a creative perspective. To be in that world that’s so rich in culture, to see monuments… We were shooting at Buckingham Palace and shooting at London Heathrow airport. But to see all that rich history, you know, from hundreds and hundreds of thousands of years ago, I think gave the show this really royal, unique energy. London becomes this undeniably awesome character in the show and gives the show this vibrant energy that’s incomparable to any other show. When you see movies and they take you to another place, I think that opportunity as a viewer allows you to truly become immersed in that world. And at the same time, it allows you to take a vacation from your own world and see these group of friends go on this roller coaster journey of love, joy, but most importantly, family. I think there isn’t enough emphasis on family and how much that matters. But I think at the end of the day, all of us want one thing and it’s to be loved and to have friends that really care about you. I think in this story you see that in such a balanced way, but in such a way that takes you on a roller coaster where each episode you’re getting hit with something crazy, and you’re in this roller coaster of visual beauty.