Wendy Williams made sure her 55th birthday was nothing short of good people, rap music and a delicious food! The daytime TV host divulged all of the wild details about her birthday weekend, which included Blac Chyna and Bevvy Smith, on her show Monday show. “I don’t know who I’ve become, but I like her,” Wendy said of the person she’s become since she split from Kevin Hunter Sr. in April. “She’s open and honest and thorough and she is fun,” Wendy described her new single self.

The mother-of-one went on to explain how she planned her entire day on her actual birthday, which was on July 18. “I made my own birthday party,” she said, joking that she was “pathetic” for planning her own birthday. “I planned out my whole day, because I can do that. New life!”, Wendy said. “So, I was invited by Tiffany’s to have breakfast at Tiffany’s… I had breakfast and they gave me a cake. Then, I got a credit card, I’ll be honest with you, my partners in the show gave me a credit card for the day. I didn’t take advantage, but I did buy a few things I really wanted! I went to Louis Vuitton,” Wendy explained before she showed the new sneakers she purchased.

That same night, Wendy had a dinner party with her close friends. “I called it the dirty dozen. I invited 12 people who didn’t know each other and I wanted it to be at a place poignant to my heart, Serendipity,” Wendy revealed, adding that the group indulged in frozen hot chocolate, loaded hotdogs, and chicken wings “with the bleu cheese with the chunks.” 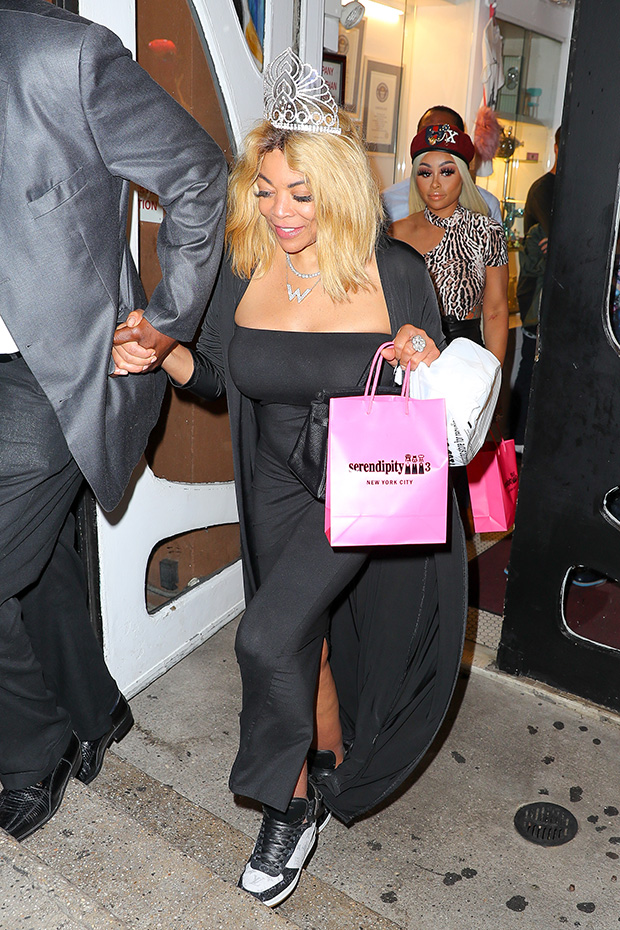 Breakfast @tiffanyandco! Happy birthday to me...civilized!🤣 Go to my #IGStory to see how I spent my birthday and the new shoes I got! #hbd #cake

Wendy continued, “A few of my guests included, Bevvy Smith, Blac Chyna and my friend Medina, I like how she rolls,” she said while showing photos from the night out. After the dinner party, Wendy and her crew had planned to go to Nas‘ album release party. “I had a pre-party before the Nas for like an hour and a half at my apartment,” she said, admitting, “I never have people over!”

While Wendy and her crew were headed to Nas’ party, the host said that the event got so crazy that it was shut down and moved to another location. She went on to say that the group ended up driving around the city as she controlled the music in the car, which everyone loved. Later on in the night, Wendy’s friend Medina picked her up for a late night boat cruise on the Hudson, where the tunes “were on fleek.”

Wendy also stepped out in a diamond tiara and a pink dress on her birthday last Thursday. Although she’s been quite candid about her jam-packed weekend, the host failed to acknowledge her new 50-something-year-old new beau — a doctor who she said she’s “crazy about.” It’s unclear if he was present at the party.