“It was amazing,” Scarlett Johansson, 34, told E! News after Marvel Studio’s presentation at Comic-Con on July 20. The studio rolled out Phase Four of the Marvel Cinematic Universe, which included a surprise appearance from the latest addition to the MCU: Angelina Jolie! ScarJo couldn’t help but gush over Angie, 44, and the rest of the women who will star in the next slate of superhero flicks. “I mean, there’s a lot of women up there that I hugely admire—Angelina, Salma [Hayek], Rachel [Weisz], Tessa [Thompson], Natalie [Portman]. It’s bananas. I think it’s very exciting. I think it grounds the presence of the MCU in a way.”

“It’s very exciting to see such a diverse group of people. It’s awesome. And it’s about time,” Scarlet told E! News. The panel also announced that she would star in a standalone Black Widow movie. It’s set before the first Avengers film and offers insight into Black Widow, specifically her past in Budapest. “I’m very excited about it, and I have to say, I was nervous coming here because we’re in the middle of shooting right now, so it’s not a time that you could ever share anything with anybody on any side of the movie, particularly in this universe, where everything is just so huge and the pressure’s on.”

“But I’m really, really proud of what we showed today,” she added. Black Widow is set for a May 1, 2020 premiere date, six months before The Eternals hit the theatres. The movie, based off a comic by the legendary Jack Kirby, centers around a group of immortal cosmic superheroes who resemble characters from Greek mythology. For months, there were rumors that Angelina was going to join the MCU as the character Sersi, but instead, she will play Thena. 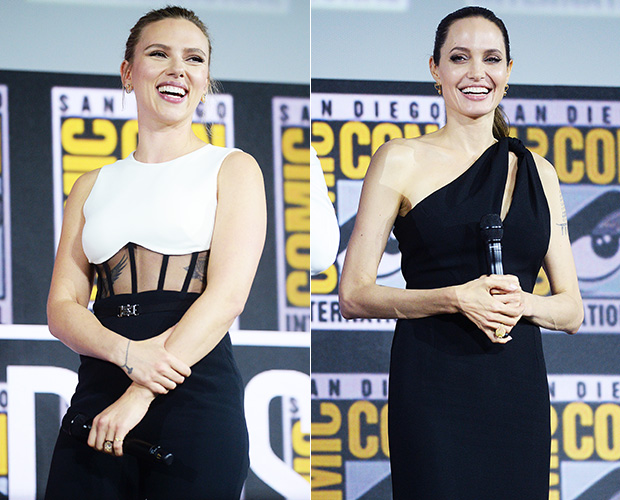 “I’m so excited to be here! I think what it means to be a part of the MCU, what it means to be an Eternal, what it means to be in this family,” Angelina told the packed hall in San Diego. The Maleficent star surprised Marvel fans by appearing onstage in a one-shouldered, knee-length black number that looked as if she was indeed a Greek goddess. “We’ve all read the script and we know what the task is and so we are going to work very, very hard.”