It looks like Kim Zolciak, 41, and daughter Brielle Biermann, 22, may check one airline company off their list when traveling in the future. The reality stars took to Twitter this past weekend to release their frustrations about an incident that happened between their family and Delta Airlines when they were traveling from Los Angeles, CA to Atlanta, GA. Brielle claims the airline kicked her entire family off the flight because they were waiting for her dad, Kroy Biermann, 33, who was held up at security, to get on with their service dog, and Kim admitted that police are now involved with the situation.

“Tommy at gate 27 delta LAX just kicked my WHOLE FAMILY OFF the flight to ATL bc we were waiting on my dad with our service dog to finish going thru security & kJ & kash started crying bc they thought we left him and Kaia was literally S—-ING AND HE KICKED US OFF!!!!! WTF,” Brielle’s tweet, which is now deleted, read.

Brielle’s upsetting tweet refers to her younger siblings, including Kroy Biermann Jr. (KJ), 8, Kash, 6, and Kiara, 5, who she claims were in tears during the alleged incident. Shortly after Brielle’s tweet started making waves, Kim took to Twitter to requote it and add her own comment. “Unacceptable @Delta but police are now involved,” it read. Delta responded to Kim and encouraged her to reach out to them through a direct message, but it’s unclear if she did or not.

It wasn’t until a day later, on July 21, that Brielle updated her followers on the situation by tweeting, “GUESS WHAT. IM LEAVIGGGG FINALLLYYY!!!!!!!! 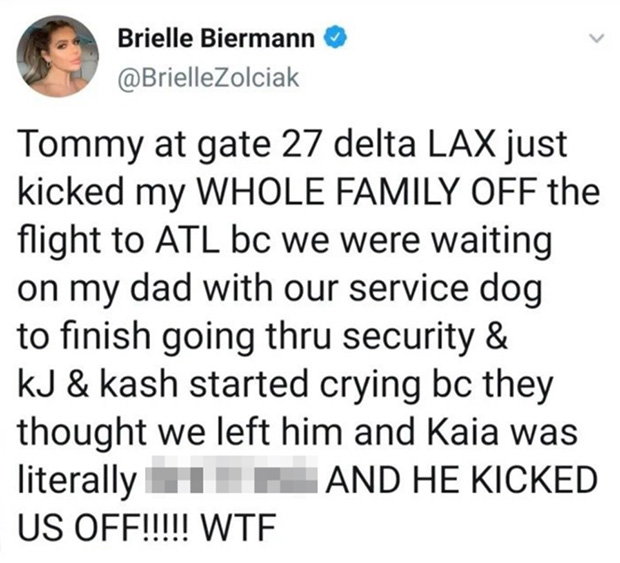 Hi, there. Thanks for tweeting us today, I'll be happy to check on this for you. Can you please share the confirmation or ticket number and verify the email address on the reservation via DM? HOS https://t.co/6iDGBJRMTU

After the tweets made headlines, Delta released its own statement about the situation. “Mrs. Zolciak Biermann and family elected to deplane their flight after her husband remained behind to provide proper paperwork for an emotional support animal,” the statement read. It also included background information that claims “Mrs. Zolciak Biermann and her children elected to board the flight to Atlanta while her husband stayed behind to clarify paperwork before  going through airport security” and “he arrived at the gate after the aircraft door was shut.” Delta also said that they worked with the family to rebook another flight but they made their own travel arrangements.

We reached out to Kim’s rep for comment but have yet to receive a response.

Related: Kim Zolciak’s Kids: Facts About Her 6 Children & Their Fathers