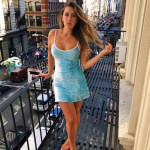 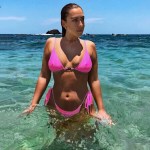 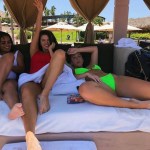 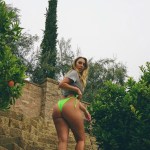 It’s the snap that delighted Selena Gomez fans. The singer looked red hot in a ‘Baywatch’-style one-piece and her BFF Theresa Mingus is revealing how the impromptu photo shoot came about.

On June 28 a photo of Selena Gomez, 26, rocking a Baywatch-style swimsuit thrilled her fans when it appeared on the Krahs swimwear Instagram account. Standing in the sea in Punta Mita, Mexico, the “Come & Get It” singer looked red hot; skin glowing, hair slicked back, working the camera with her chestnut brown eyes. The picture caption read, “BAE WATCH 💋 @selenagomez is wearing the Comino Rib One Piece also available in navy and white.”

It’s the type of celebrity promotion that any designer would be desperate to get. In essence, the picture was taken by Selena’s best friend on a girlie vacay to Mexico. It just so happens that the singer’s BFF is the Krahs founder and creative director, Theresa Mingus, 29, who told HollywoodLife EXCLUSIVELY how the sizzling photo shoot came about.

“She looked so good,” Theresa says, gushing about her pal and former boss. (She was Selena’s executive assistant for nearly five years until 2018.) “[I said] ‘Dude, what the heck? You’re wearing the red Baywatch [swimsuit], you look so hot.’”

The ladies were in Mexico for Selena’s cousin, Priscilla DeLeon’s bachelorette party. The pop star had zero problems posing in a Krahs swimsuit. While it was not one of the pieces that she collaborated with Theresa on, she has been a huge supporter of the line and her friend’s business venture. Plus, she apparently loves taking pictures. “Selena takes a ton of pictures,” Theresa says. “She actually takes the best pictures.” The Krahs creator adds, “She’s so supportive… but it’s also her cousin’s bachelorette, who wants to have lots of memories and take pictures. So I feel like everything’s just been very organic and just happens the way it happens.”

Selena isn’t the only person rocking Krahs bikinis and swimsuits on Instagram. Theresa – who admits that she practically lives in them – happily models pieces from her line, which was launched in May. When it comes to feeling comfortable on the beach or lounging by the pool, Theresa has a good tip, whatever you’re wearing, “own it.” Asked who she’s making swimwear for, she has a simple answer, “Everyone.” “I’m not the skinniest girl. I’ve never been super skinny,” says Theresa, who admits she doesn’t care about “showing skin.” “I’ll run around, whatever… I want everyone to wear my suits.”

By “everyone” she means all sizes and budgets. “I’m figuring it out, but it’s worth it,” Theresa says. “It’s so fun being only two months in and seeing how many people have posted pictures [wearing them]. It makes me so happy. It almost makes me want to cry because, I’m like, ‘This is so exciting. I did this. This is so cool.’”