Wendy Williams is in great spirits these days! The talk show host, 54, was photographed looking cheery in reflective aviators on Tuesday. Wendy, who was heading to her New York City studio to film her talk show, nearly stopped traffic in a tight, beige maxi dress with a light, snakeskin-print jacket. But, it was her footwear that really turned heads, as she stepped out in fuzzy black slippers. She also carried a shopping bag, along with two purses.

Wendy, who turns 55 on Thursday, gave viewers an update on her health last week. She revealed that she’s been diagnosed with lymphoedema when she addressed recent paparazzi shots that showed her swollen ankles during the show’s 5-week vacation hiatus. “Lymphoedema, by the way, I’ve been diagnosed,” she told her studio audience, explaining why her ankles were puffy in the photos. “It’s not going to kill me, but I do have a machine — and how dare you talk about the swelling of it all.”

Wendy went on to explain that despite her diagnosis, she will be just fine. “I’ve got it under control. If [the swelling] in my feet never goes all the way down, at least I have this machine,” she explained. “I sit for 45 minutes a day. It’s the best party entertainer ever. Everybody [that] comes over wants to do it.” Wendy, who’s remained optimistic about the incurable condition, shared a photo of her hooked up to the machine on her Instagram on July 15. 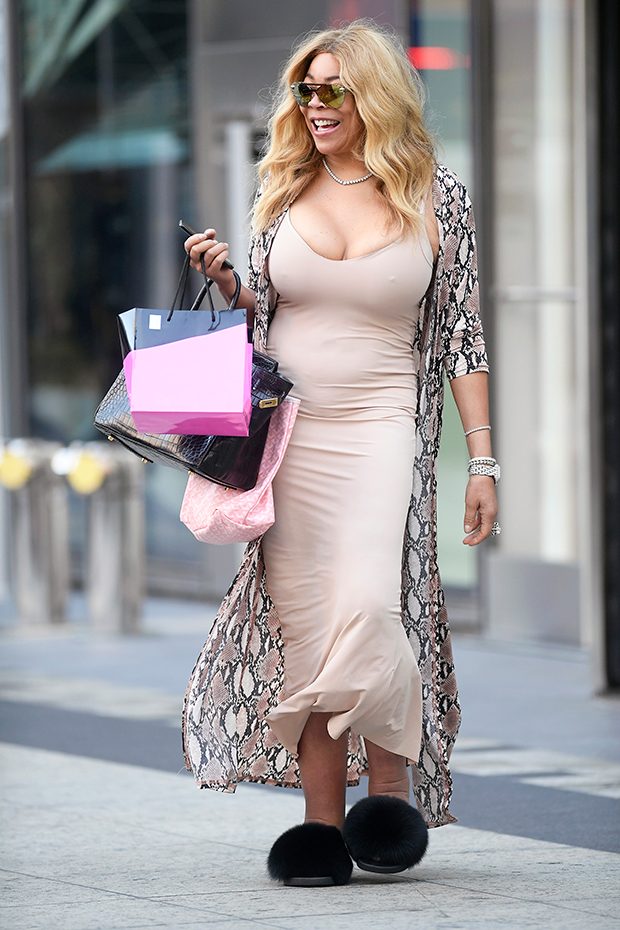 “Lymphoedema is a chronic condition that causes swelling, usually in the arms or legs, when someone’s lymphatic system is compromised,” according to Mayo Clinic, which states that blockages can occur when lymph nodes become damaged or are removed, which then results in swelling.

Fans of The Wendy Williams Show will know that the host returned to her purple chair in March after taking a hiatus to focus on her health. Wendy was diagnosed with hyperthyroidism and Graves’ disease, following a fainting episode during her live Halloween show in 2017.

As Wendy focuses on her “new life,” following her divorce from Kevin Hunter, she’s also enjoying a new man in her life. The host revealed on her show July 10, that she’s dating a 50-something-year-old doctor, who she’s crazy about!