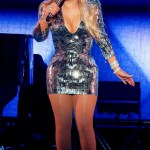 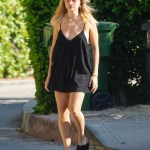 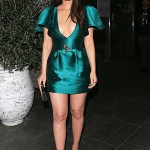 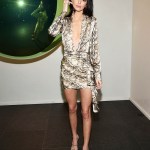 Mariah Carey braved the Canadian rain in a sequined mini dress, which she rocked on stage while trying not to ‘slip and fall’ at the Quebec City Summer Festival.

Mariah Carey, 49, wasn’t exactly wearing a rain coat while performing at the Quebec City Summer Festival on July 11. Despite a downpour of rain, she powered forth in a sequined silver mini dress, crystal bling and ankle-strap heels. Not exactly weather-proof wear, but Mariah didn’t lose her grip — or her footing — and looked incredible as always as she serenaded the poncho-clad crowd! While she wasn’t as layered up as the Festival d’été de Québec attendees, her dress did accentuate her exceptionally slim waist. Kim Kardashian’s 2019 Met Gala look has competition!

Despite Mimi’s calm composure on stage, the songstress revealed that she was indeed focused on not face-planting amid the slippery conditions at her concert in Canada. “Thank you so much Quebec for making it ‘through the rain’ with me at the show last night. You were an incredible audience and I appreciate you so much. Hope you enjoyed the show even though I was doing my best not to slip and fall on my a** lol,” Mariah captioned an Instagram video from her performance on July 12. Jordin Sparks coined the perfect name for the situation, which the singer left in Mariah’s comments section: “The ‘raining’ Queen. 🙌🏽.”

Gucci Mane, Logic, Bishop Briggs, Imagine Dragons and Blink-182 also booked gigs for this summer festival, hosted in the French-speaking province of Canada. While Mariah sang all the Mimi classics, fans are also speculating the possibility of Mariah releasing a new project — a remix with none other than Lil Nas X, 20!

With collaborations between Billy Ray Cyrus, Young Thug and Mason Ramsey already checked off, Lil Nas X set his sights on a partnership with Mariah next. “Ok mariah carey lets get this remix in,” he tweeted on July 12, and Mariah tweeted back with a photo of her wearing a cowboy hat with the caption, “One Sweet Town Road!” Please, Mariah, make this dream collab happen.