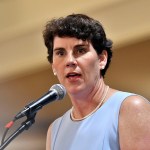 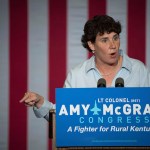 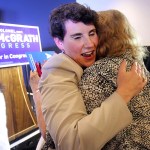 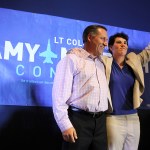 The turtle better watch his back. Amy McGrath, a retired pilot who narrowly lost her campaign to unseat Rep. Andy Barr in 2018, has now set her sights on Mitch McConnell’s Senate seat. Here’s what you need to know.

“I’m running to replace Mitch McConnell in the U.S. Senate,” Amy McGrath, 44, said on July 9 while announcing her campaign to challenge the 77-year-old Senate Majority leader. In the video she shared to social media, the Kentucky native recounts how at age 13, she wrote a letter to her senator, “telling him that I wanted to fly fighter jets in combat, to fight for my country and that women should be able to do that. He never wrote back…I’ve often wondered how many other people did Mitch McConnell never take the time to write back or think about.” The video also features other Kentuckians who also felt passed over by McConnell’s policies.

“Everything that’s wrong in Washington had to start someplace. How did it come to this, that even within our own families we can’t talk to each other about the leaders of our country anymore without anger and blame? Well, that started with this man, who was elected a lifetime ago,” Amy said, accusing Mitch of “turning Washington into something we despise…a place where ideals go to die. I’m running for Senate because it shouldn’t be like this.” McConnell has prided himself on how he’s killed all the bills coming from the Democratically-controlled House. “If I’m still the majority leader in the Senate think of me as the Grim Reaper. None of that stuff is going to pass,” he said while speaking to community leaders in Owensboro, Kentucky, per The Hill.

McGrath has her work cut out for her. Mitch was elected to the Senate in 1984 and has been secure in his seat ever since. In 2014, he beat Democrat Alison Lundergan Grimes by 15 points, per CNN. Kentucky also went heavily for Donald Trump in the 2016 election, as the former Celebrity Apprentice star won the state by 30 points. As she plots her strategy to do what no one else has been able to do for three decades – unseat McConnell – here’s what you need to know about Amy.

I’m running to replace Mitch McConnell in the U.S. Senate. Everything that’s wrong with Washington had to start somewhere—it started with him. With your help, we can defeat Mitch and defend democracy. Join us: https://t.co/c4b0WAp4ji pic.twitter.com/DNLjFkHGua

1. She’s a celebrated combat veteran. Amy is a retired U.S. Marine Corps Lieutenant Colonel. After she graduated from the Naval Academy, she became the first woman in the Marine Corp to fly a combat mission in an F-18 fighter jet, according to CBS News. Over 20 years, she flew 89 combat missions in Iraq and Afghanistan. She was inducted into the Aviation Museum of Kentucky’s Hall of Fame in 2016.

2. She ran for office before. This isn’t Amy’s first political rodeo. She ran against Rep. Andy Barr in 2018 for his seat in the House of Representatives. She refused to run negative attack ads against Bar, according to the Associated Press, while he and outside groups spent millions of dollars labeling her “too liberal” for Kentucky. Amy also was a fundraising juggernaut and outspent Barr by nearly $3 million.

Amy ran up comfortable margins in the heavily Democratic Lexington area, according to AP, and was writing her victory speech when the tide turned red. Barr was able to squeak out a victory, thanks to the rural areas (and an appearance by President Trump, a rarity for a House member.) Needless to say, Amy has learned from her mistakes.

3. She’s running as a moderate. As Amy’s campaign announcement decries the partisan gridlock in Washington, it is no surprise that she is running as a moderate. During a July 9 appearance on Morning Joe, McGrath said she watched the Democratic presidential debate and was concerned that many candidates were too far on the left, per CNN. She noted that Kentucky voters aren’t fans of either political party because Trump hasn’t delivered on his promise to “drain the swamp” in Washington and deliver lower drug prices and a more effective alternative to the Affordable Care Act. “Those things haven’t happened because of guys like Senator McConnell,” she said.

It was great to be on the show this morning! @Morning_Joe https://t.co/qtwwqwd7Vs

4. Amy McGrath is a mom. Amy knows how to reach a compromise with Republicans because she married one! Her husband, now-retired naval Lieutenant Commander Erik Henderson, is a lifelong Republican, according to The New York Times. The couple has three children together.

5. She’s also a Simpsons fan. While serving her country, Amy’s call sign was none other than “Krusty,” as in Krusty the Clown, the character from The Simpsons. “My hair would stick out, and the guys thought I looked like Krusty the Clown,” she told Mother Jones in 2018. This actually might work out in Amy’s favor. The Simpsons appeared to predict Trump’s presidency (2000’s “Bart to the Future”) and the 2003 episode, “Mr. Spritz Goes to Washington,” saw Krusty the Clown win a seat in Congress. Among all the other things that The Simpsons predicted, will Amy’s Senate win be another?