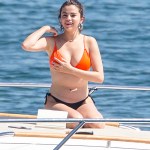 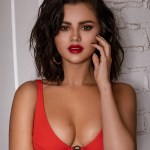 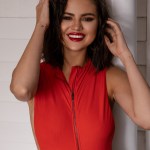 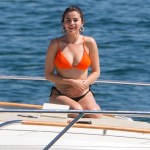 The best thing about Selena Gomez being in so many bridal parties is all of the beach bachelorette trips she goes on. Sel rocked a black one piece on a getaway ahead of her cousin Priscilla’s wedding.

Selena Gomez threw a bachelorette getaway for cousin Priscilla DeLeon during the last weekend of June in Mexico and now she’s sharing photos of the singer and the bridal party on the beach. In an Instagram photo Priscilla posted on July 8, she wrote “Marriage license day. So it’s only right to post a bachelorette picture since I’m almost a married woman!” and Selena could be seen in a black one piece tank suit looking absolutely gorgeous.

All of the ladies in her bridal party wore different styles of black swimsuits while Priscilla wore a white one along with a veil. Selena is her cousin’s maid of honor and made sure she had the best bachelorette weekend ever as they spent four days at the Four Seasons in Punta Mita, Mexico. The ladies spent plenty of time on the beach, rode ATV’s through the jungle and visited local street markets.

In a July 2 Instagram photo she shared of she and Selena on the beach at sunset wearing floral dresses, Priscilla credited Sel with her amazing weekend. “I wouldn’t want anyone else standing next to me at the altar (even the two pregnant ones that couldn’t attend),” she captioned the pic. “My maid of honor really showed out this weekend and threw me the bachelorette party of my dreams. I am forever grateful.”

Marriage license day. So it’s only right to post a bachelorette picture since I’m almost a married woman!

During their Mexican getaway Selena donned a nearly identical tank swimsuit in red, looking like an iconic Baywatch babe. She wore it on June 28 as she dipped in the ocean and laid around on beach loungers alongside Priscilla and Sel’s bestie Theresa Mingus. The “Back to You” singer was also a great advertisement for the Krah’s swimsuit, as Teresa is the company’s founder and creative director.