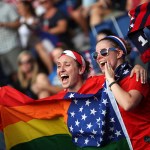 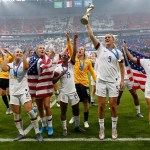 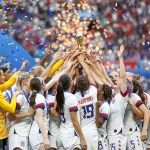 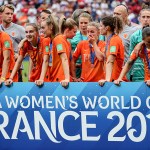 U-S-A! For the first time in history, the United States Women’s National Team repeated as FIFA Women’s World Cup champs after defeating the Netherlands, 2-0, in an epic game!

In front of a packed Parc Olympique Lyonnais stadium, the United States finally accomplished the one feat it hasn’t been able to pull off in recent history: win consecutive Women’s World Cup. Though the US Women’s National Team has dominated the FIFA tournament, the squad has always been denied back-to-back championships – until now. When the final whistle blew on July 7, the Americans basked in the triumph of their victory over the Netherlands with a score of 2-0.

After going 0-0 for the first half, Megan Rapinoe and Rose Lavelle each scored in the second half, leading the United States to victory. Rapinoe’s made a penalty kick in the 62nd minute, no less than 10 minutes before Lavelle solidifed the team’s win by scoring off a left-foot strike.

What a difference a few years make. Though the United States won the 2015 Women’s World Cup, the squad suffered its most humiliating loss the following year. In the 2016 Summer Olympics, the USWNT drew against Sweden in the quarterfinal. A penalty kick shootout followed, with the Swedish team winning 4-3. The loss was the first time that the United States didn’t advance to the gold medal game of the Olympics and was the first time that the USWNT failed to make the semis. The team suffered three home losses after that, prompting a period of experimenting, which yielded great results. In July 2017, the group began a 28-game unbeaten streak that lasted until the start of 2019, when they suffered a 3-1 loss to France.

The United States got revenge on their rivals in the World Cup. After dominating the group stage – they annihilated Thailand, 13-0, went 3-0 over Chile and avenged their Rio 2016 loss by putting away Sweden, 2-0 – the United States met France in the semi-finals. Thanks to the work of Megan Rapinoe, who scored both goals in the USA’s victory over Spain in the Round of 16, the USA sent their main World Cup competition packing. The 2-1 win booked the USA to the semis where they faced England. While Megan sat out the game with a light hamstring injury, Christen Press and Alex Morgan stepped up to score for the USA. England’s Ellen White scored shortly after Christen’s goal, and nearly scored the equalizer at the 68th minute. However, the goal was called off after a Video Assisted Referee (VAR) review found Ellen to be one step offside. England’s Steph Houghton was given a penalty kick, but USA’s keeper, Alyssa Naeher, made the save, ensuring her team’s placement in the final.

Now that the USA has won back-to-back World Cups, what’s next? Another ticket tape parade in New York City? Megan Rapinoe said earlier in 2019 that she would not go “to the f*cking White House” if her team was invited. Trump tweeted that Megan “should never disrespect our Country, the White House, or our Flag, especially since so much has been done for her & the team,” per HuffPost.

That tweet was another tone-deaf statement from the president since the USWNT sued the US Soccer Federation in March over allegations of gender-pay-discrimination. The USSF claimed that “based on differences in the aggregate revenue generated by the different teams and/or any other factor other than sex,” per CNBC, but an analysis of financial statements revealed that the women generated $50,8 million from 2016 to 2018, while the men only brought in $49.9 million.

The US Women just won their second consecutive World Cup while the men failed to qualify for the 2018 tournament. Despite this failure, Forbes reports that the men earned a total of $5.4 million, while the women – who won the 2015 World Cup – received $1.7 million. The US Women are reportedly going mediation after the World Cup, and they might just plunk their brand new trophy down on the desk as to why they deserve equal if not greater pay than the men.