Salma Hayek‘s heart is broken over the death of Cameron Boyce, who tragically passed away in his sleep due to a seizure at only 20-years-old. She played his mother in 2010’s comedy Grown Ups as well as it’s 2013 sequel and the two were close. The 52-year-old actress took to her Instagram upon hearing the news on July 7, revealing that they had stayed in touch and she and praised him for bring a “shining light.”

“I had the privilege to play Cameron’s mother in #grownups 1 and 2 and we stayed in touch through the years He was spirited, talented, kind, generous, funny and a shining light. His joy will live in our hearts forever as he goes on dancing and shining elsewhere. My heart goes to his lovely family. @thecameronboyce,” she wrote in an emotional Instagram post alongside a picture of herself and Cameron on a red carpet and a pic of them starring in Grown Ups.

Their co-star Adam Sandler, who played Salma’s husband and Cameron’s dad in Grown Ups and the sequel also mourned his passing. He tweeted, “Too young. Too sweet. Too funny,” Adam said. “Just the nicest, most talented, and most decent kid around. Loved that kid. Cared so much about his family. Cared so much about the world. Thank you, Cameron, for all you gave to us. So much more was on the way. All our hearts are broken. Thinking of your amazing family and sending our deepest condolences.” 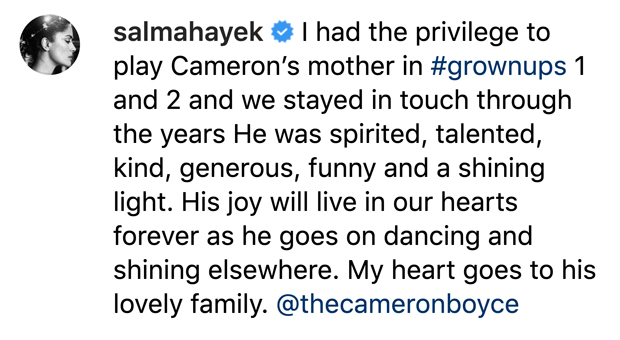 “It is with a profoundly heavy heart that we report that this morning we lost Cameron,” a spokesperson on behalf of the Boyce family said in a statement to HollywoodLife. “He passed away in his sleep due to a seizure which was a result of an ongoing medical condition for which he was being treated. The world is now undoubtedly without one of its brightest lights, but his spirit will live on through the kindness and compassion of all who knew and loved him.” Cameron was best known for his role as Carlos, the son of notorious Disney villain Cruella De Vil, in the Descendants trilogy. He had a long history of work on various Disney Channel projects including Liv and Maddie, BUNK’D, and Austin & Ally.