After a brutal week of taking heat for buying Taylor Swift’s album catalog, music manager Scooter Braun has revealed how he’s doing after getting bashed by her fans and singing superstars.

It’s been a long week for Scooter Braun. On June 30, it was revealed that he 38-year-old music manager purchased  Scott Borchetta‘s Big Machine Records for $300 million, thereby acquiring the rights to Taylor Swift‘s entire album catalog, leaving her “sad and grossed out.” Ever since he’s taken heat from her fans as well as singing superstars. He tried to ignore the fracas in a Fourth of July Instagram post congratulating his client Ariana Grande on her Thank U Next being the top RIAA awarded album so far in 2019 and revealed how he’s holding up.

A fan wrote in the comments “Just ignore the trolls, just a daily reminder u are loved!” and Scooter responded back “I’m good. Thanks.” Swifties saw the comment and came in for the kill. One wrote “you won’t be for long” while another added “@scooterbraun go to hell. Bye” after his responded. Taylor’s fans continued to pile on, with one writing ‘F**K YOU” and he wrote back “Bless you.”

The hate continued in an Instagram post later in the day where he was seen kissing wife Yael, 32, and wished everyone a happy Fourth of July. It was soon flooded by comments from Taylor’s fans, including “Hey just a question, how it feels to steal a person’s 12 years of work??” and “Celebrating freedom yet you don’t give another artist the freedom of her own music ☠️.” 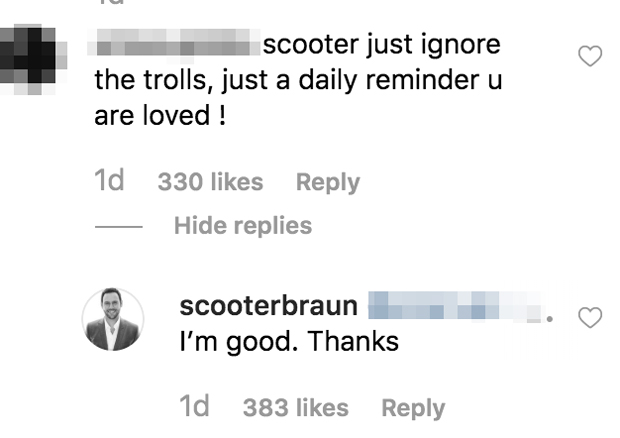 Taylor, 28, was quite clear about how disturbed and deeply saddened she was by someone she considers her enemy owning the rights to her life’s work. In a June 30 heartbreaking Tumblr post she wrote: “I learned about Scooter Braun’s purchase of my masters as it was announced to the world. All I could think about was the incessant, manipulative bullying I’ve received at his hands for years.” She called it her “worst case scenario” and “Never in my worst nightmares did I imagine the buyer would be Scooter. Any time Scott Borchetta has heard the words ‘Scooter Braun’ escape my lips, it was when I was either crying or trying not to. He knew what he was doing; they both did. Controlling a woman who didn’t want to be associated with them. In perpetuity. That means forever.”