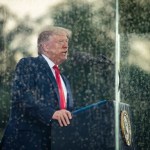 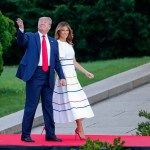 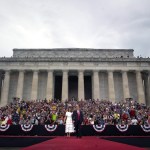 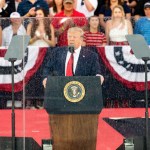 Donald Trump celebrated Independence Day with a military parade that dragged massive tanks through the streets of DC, but it was his messed up hair at the event that had everyone talking!

The Fourth of July in 2019 was marked not just by fireworks and American flags in Washington, DC, but by a full military parade at the behest of President Donald Trump. Following the lead of autocracies like North Korea, the president co-opted the annual fireworks show on the National Mall to command a parade of tanks down the streets of the United States capital. His “Salute to America” was a sight to behold. The weather did not hold up for the event, either, and when rain poured down, Trump’s hair got messed up, and revealed a bald spot at the back of his head! When he turned his back to cameras filming the event, the bald spot was totally visible on television, and people on Twitter could not stop cracking up.

The event also included appearances by B-2 stealth bomber and F-22 fighter jets, the famed Blue Angels… and Air Force One. Before a massive, 30-minute fireworks display, the president also gave a speech to a crowd of supporters from the steps of the Lincoln memorial. The speech also assured that he would get mocked on social media, as he referenced airports while discussing the American Revolution. Of course, there was no air travel during the 1700s, so this was a majorly glaring error.

Trump’s paradge was plagued by problems from the beginning. First and foremost, nobody wanted it to happen besides Trump himself. The Council of DC, which crafts city laws, tweeted on July 2, “We have said it before, and we’ll say it again: Tanks, but no tanks.” They cited a Department of Defense memorandum from March 2018 that said that year’s Veteran’s Day parade could not include tanks; “consideration must be given to minimize damage to local infrastructure.” There was also the fact that Trump clearly knew nothing about the tanks that he demanded tear up the streets.

.@realDonaldTrump would not like this picture of his shiny bald spot from his hamster cage at #TrumpParadeFail today. Please do not #retweet. pic.twitter.com/fH04mxGprH

In an interview from the Oval Office on July 1, Trump commented that “You’ve got to be pretty careful with the tanks because the roads have a tendency not to like to carry heavy tanks so we have to put them in certain areas but we have the brand new Sherman tanks and we have the brand new Abrams tanks. We have some incredible equipment, military equipment on display — brand new. And we’re very proud of it.” Yes, the US operates M1 Abrams tanks, but WWII-era M4 Sherman tanks have not been operated since the 1950s.

Trump has wanted a military parade of his own since attending France’s Bastille Day celebration in July 2017, where he told President Emmanuel Macron, “We’re going to have to try to top it.” His plan was scrapped in summer 2018, though, when it was estimated that the parade would cost $100 million and wreak havoc on the streets of DC. None of that apparently matters this year, though, because Trump put on what he called “the show of a lifetime,” despite the protestations of Congress and local authorities. A White House aide told USA today that just the cost of shipping the tanks to DC cost $870,000.