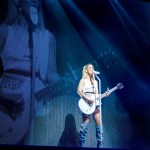 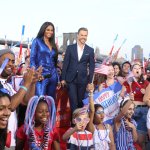 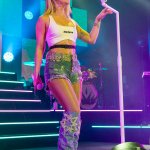 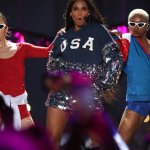 America — it’s time to ‘Level Up’! Ciara helped NBC ring in the festivities of July 4th with incredible performances and gorgeous looks for ‘Macy’s 4th of July Fireworks Spectacular’.

Ciara, 33, pulled double duty for America’s birthday, agreeing to not only host the annual Macy’s 4th of July Fireworks Spectacular but also perform! Stepping away from her co-host Derek Hough, 34, Ciara put on quite the show before the main event: a fireworks extravaganza across the NYC sky. She opened the show with a performance of her iconic Missy Elliott, 48, collab “1, 2 Step.” Ciara also performed “Thinkin Bout You” and “Level Up” from her new album, Beauty Marks.

The singer rocked a number of great looks throughout the evening. Ciara dazzled in a sparkling blue Greta Constantine Resort 2020 jumpsuit that was perfect for the Fourth of July. For her performances, Ciara hit the stage in an all-white outfit and a patriotic hoodie and shorts with sequins. Her hoodie had “USA” written across it.

Ciara and Derek joined an A-List lineup of stars paying tribute to America during the special. Luke Bryan, Maren Morris, Khalid, and Brad Paisley all lent their talents to the telecast, belting out their big hits on one of the best celebrations of the year. But it wasn’t just about the music! Once the fireworks took off over the Brooklyn Bridge, things were taken to a whole new level. For 2019, not only did the musical score feature patriotic classics such as “America the Beautiful” and “Stars & Stripes Forever,” but classic American films and their scores were celebrated as well.

Famous compositions from John Williams, like the themes to Star Wars, Superman, and E.T. were featured, along with by Max Steiner’s “Casablanca Suite” and Alfred Newman’s “20th Century FOX Fanfare.” Another highlight was the pre-recorded rendition of The Wizard of Oz classic “Over the Rainbow,” performed by Jennifer Hudson for the film’s 80th anniversary.