She made it! Despite Lisa Vanderpump’s tragic loss of her mom in England on June 17, she’s landed in Kentucky and will be there when Jax Taylor weds Brittany Cartwright.

Lisa Vanderpump has managed to rally back despite the tragic loss of her mom on June 17. She flew to London to be with her family and the 58-year-old wasn’t sure if she would be able to make it to Vanderpump Rules stars Jax Taylor and Brittany Cartwright’s June 29 wedding in Kentucky. But she touched down in the Bluegrass state on June 28, as Lala Kent‘s fiance Randall Emmett posted an Instagram photo of a smiling Lisa holding a glass of rose aboard a private plane alongside husband Ken Todd, 61. Randall captioned the pic “We’re here!! We love you Jax. It wasn’t easy to get here but we’re here for you on your magical day,” while tagging Lisa, Jax, Brittany and Lala.

“Lisa Vanderpump is thrilled to be going to Jax & Brittany’s Wedding. She made the decision very last-minute — essentially this morning — and really didn’t tell anyone at all since she had been so touch and go. She hit the ground running immediately and filmed her first scenes since taking a hiatus due to her mother’s death right away after landing,” a source close to Lisa tells HollywoodLife.com EXCLUSIVELY.

“She decided it would be good for her to go and it was better to be there having fun than sitting at home. She’ll head to London once the autopsy is completed on her mother. Filming and a joyous occasion after two weeks of mourning no doubt will lift her spirits and that’s just what she needs right now,” our insider adds. “Those close to her are happy she did this. It was a surprise to everyone as last the Vanderpump cast heard it sounded like she was not going to be making it.” 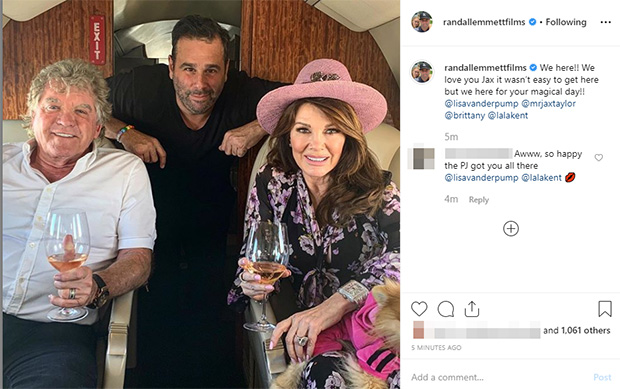 “The entire cast was surprised and all thought she wasn’t coming, but she loves Jax & Brittany and always said she’d do her best to rally and get there,” our source adds. Lisa’s mom Jean Vanderpump passed away at age 84 on June 17, just 14 months after LVP lost her brother Mark Vanderpump, to a suicide in April of 2018.