Cardi B’s stylist, Kollin Carter says her husband, Offset has input on what she wears! — So much, that her glam squad refers to him as their very own Kanye West, who’s known for his involvement in the evolution of his wife, Kim Kardashian’s style.

Cardi B, 26, is known for her wild fashion choices, courtesy of her longtime stylist and friend, Kollin Carter. But, her husband, Offset, 27, also has major input on her style. “He for sure has an opinion. We call him our ‘Kanye‘ [West], because he has an opinion on what she wears,” Kollin told HollywoodLife, EXCLUSIVELY while at the Creative Jenius Reports “Respect The Process” event, held at the Beverly Center in their private members club Room Service, “Sometimes it’s like, ‘Okay, we get it,’ and sometimes, we hear it and we let it go in one ear and out the other,” Kollin said of Offset, who he called a “super cool dude.”

Kollin went on to add that he and his team are certainly “open to opinions” about Cardi’s fashion. However, “the vision [we have] is normally the vision,” that makes up the final product of Cardi’s looks. And, the “Press” rapper definitely “has a lot of input” on what she wears, Kollin said.

“Nowadays we do love showing off her tiny waist, but we are really open to all types of looks and silhouettes,” he continued. “We love having fun with silhouettes. Like I said, you have a female rapper and they automatically think she is going to have latex on all the time or a high waisted panty on all the time. That is cool for a performance, but sometimes, you need to put clothes on and she lets me have those moments and she understands those moments,” Kollin explained. 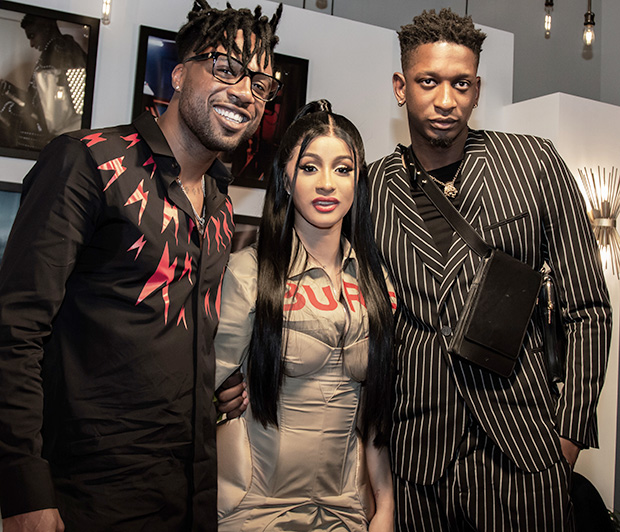 Cardi and Kollin began working together before the success of her debut hit “Bodak Yellow” in 2017. The stylist admitted that Cardi makes him feel appreciated — something he’s grateful for. “She is amazing. I feel like she is one of those people who treats everybody the same,” Kollin said. “I have heard nightmares about other artists, about experiences that they have gone through with their glam squad and I just feel blessed that I got a good humble person from the Bronx. You know, we kind of came up not too long after one another, so I feel like it’s all still new and we are all just basking in it and being appreciative.”

HollywoodLife caught up with Kollin right after he styled Cardi’s numerous looks for the BET Awards on June 23. Kollin had his work cut out for him that night, as the rapper rocked three different looks throughout the show. First, she stunned in a green caged, embellished bodysuit, with exaggerated sleeves and chaps for her sultry performance of her hit singles, “Clout” and “Press,” which featured her husband on stage. Cardi’s first look was custom designed by Bryan Hearns. Her second look — a lime green, Swarovski crystalized gown with large shoulders and a caged top — was another custom look, this time by Nicolas Jebran. Cardi’s third and final BET outfit was an ombre yellow-and-blue strapless mini, which she paired with matching over-the-knee boots by Fausto Puglisi.