After fans caught wind that Porsha Williams, 37, had unfollowed her fiance, Dennis McKinley, 42, on Instagram and stopped wearing her engagement ring, E! News reported that the couple had split. And now, fans, as well as Porsha’s Real Housewives of Atlanta co-stars, are sending her love in hopes of helping her get through this difficult time in her life. On June 20, following the news, Porsha posted a cryptic message on Instagram that said, “Dear God, I made it out of bed this morning… Thank you so much.” She also captioned the quote with prayer hands and a sun emoji.

After seeing the heartbreaking message, Porsha’s RHOA co-star Cynthia Bailey, 52, commented on the post with a heart emoji. Cynthia didn’t provide any words alongside the emoji, but it seems clear that Cynthia is letting Porsha know that she’s there for her if she needs a shoulder to cry on. Other commenters sent similar messages, including those with kissing face emojis and more prayer hands.

This new message comes after rumors suggested that Dennis cheated on Porsha with Sincerely Ward from WAGS Atlanta. Dennis denied the allegations when they first surfaced in May, while Sincerely also released a statement claiming that the accusations were not true. She even said that she’d “never met” Dennis at all. 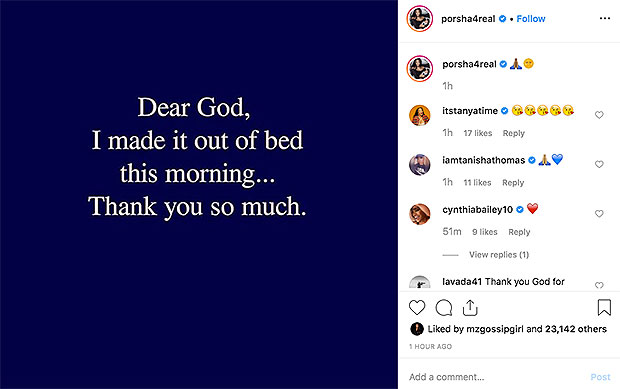 Porsha and Dennis just welcomed their first child, daughter Pilar Jhena, together in March 2019, and they were set to get married on Dec. 31, so given the circumstances, this news is extremely upsetting. HollywoodLife has reached out to Porsha’s rep for a comment, but did not receive an immediate response.