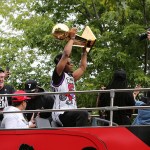 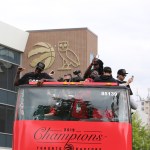 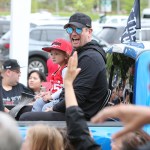 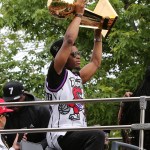 The Toronto Raptors celebrated their 2019 NBA Championship with a massive parade featuring Drake, Kawhi Leonard, and more! As Canada parties, check out all the wildest moments.

Though the June 17 forecast for Toronto predicted cloudy skies, the sun shone down on “the 6” as millions filled the streets in celebration of the Toronto Raptors. The Canadian basketball squad took a well-deserved victory lap after defeating the Golden State Warriors in the 2019 NBA Finals. While riding on top of double-decker buses, the team – featuring Finals MVP Kawai Leonard, Fred VanVleet, Kyle Lowry, Danny Green and more – basked in the love of all their fans. Speaking of fans, the Raptors’ No. 1 supporter, Drake, was on board one of the busses. He, Kyle Lowry, and other Raptors chugged champagne, waved to fans, and just had a blast throughout the whole parade.

In addition to all the smiles and shouts of joy during this parade, there were also plenty of tears. “It’s really important because the amount of years we’ve spent watching this team, the amount of heartbreaks, the devastation that we’ve had in playoffs and the really bad years that we’ve gone through,” Morteza Hashimi, a Canadian fan who said he “grew up watching basketball,” told the CBC. “To finally have this great achievement, it’s really important to have front row seats to be able see and witness everything. I’ll probably tear up a little bit, to be honest with you.”

While the sight of the Raptors parading the Larry O’Brien trophy throughout Toronto will make every Canadian beam with pride, for Prime Minister Justin Trudeau, 47, the victory is even sweeter. The Canadian leader will enjoy this victory with a nice glass of California wine, courtesy of U.S. House Speaker Nancy Pelosi, 79. Trudeau and the California Democrat had a friendly wager going into the NBA Finals: the winner gets a care package full of local goods from the loser’s town.

“The Raptors are making history and they aren’t done yet. We’re going all the way, Canada,” the Canadian Prime Minister issued in a statement when the Raptors were up 3-1, according to Fox Business. “Ghirardelli chocolates and a glass of California wine are going to pair nicely with the Raptors’ first NBA title. We the North.” Nancy Pelosi continued to have faith that the Warriors could pull off what the Cleveland Cavaliers did in 2016 and come back from a 3-1 deficit, as her statement read, “The only thing sweeter than watching Golden State once again become world champions is doing so while enjoying a selection of Canada’s finest. I am proud to be part of Dub Nation!” Sadly for Madame Speaker, the Dubs fell to Raptors. Perhaps while Trudeau is enjoying some California wine, Nancy can say “I am Canadian” while cracking open a case of Molson?