Gail ‘Yovanna’ Momplaisir is ‘sad’ to see her friends, NeNe Leakes and Cynthia Bailey at odds. She told HollywoodLife that she hopes to help ‘bridge’ the gap between the ‘RHOA’ stars because they ‘shared a great friendship’ before their falling out on the show’s 11th season.

Fans of The Real Housewives of Atlanta would say that Gail “Yovanna” Momplaisir is stuck in the middle of the ongoing feud between NeNe Leakes, 51, and Cynthia Bailey, 52. However, she doesn’t feel that way at all. Gail, who is friends with both NeNe and Cynthia, wants to help unite the former friends. “I think they definitely need to sit down and talk, so I’m hoping at some point, I can help be the bridge between the two of them because they shared a really good friendship for along time,” Gail explained during an EXCLUSIVE interview with HollywoodLife. “And, for their relationship to diminished to something like this … it’s sad,” she added.

Gail, who is hoping to become a full time housewife on the 12th season of the Bravo show, went on to explain that she isn’t afraid to speak her mind when it comes to her friends’ rocky relationship. “I try my hardest to kind of stay out of the things that they have going on, but at the same time, I don’t have a problem speaking up for what I feel is right,” she said before dissecting the situation at hand. “It’s unfortunate that NeNe has been getting so much backlash because of the way they fell out, when it was all just her wanting Cynthia to just take her own advice. Do I still think she should have taken her own advice? — Yeah, because it’s the same situation,” she continued. “Do people make mistakes in friendships? — Absolutely. But, should it have gone this far? — No.”

After NeNe and Cynthia’s feud played out on season 11 of RHOA, are the two Bravo alum’s even open to hashing things out? “I know that last time when I talked to Cynthia, at that point in time, everything was so fresh and she was pretty upset about it,” Gail admitted, adding that Cynthia didn’t seem open to speaking with NeNe at the time. 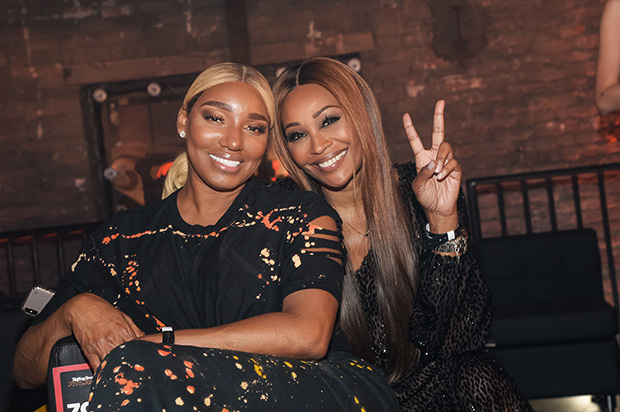 Nonetheless, “I think that things might have changed over time,” Gail teased. “I know that NeNe, as of now, doesn’t want anything to do with anybody either. So, I don’t know what it’s going to take. It’s going to take something fierce to get them to chit chat, because as of now, from the conversations I had, if they had to meet today to talk, I don’t see it happening. No,” she continued. Hey, we can only hope, right?

If you haven’t caught up on the tea down in Atlanta, Cynthia and NeNe’s feud started when Cynthia invited Kenya Moore to her Seagram’s cocktail event this past season. — A move NeNe thought was made to purposely tag-team her since she does not get along with Kenya. Since then, Cynthia and NeNe have been at odds, although Cynthia has said that she didn’t even expect Kenya to show up to the event. But, RHOA fans will know that she indeed attended the event.

Gail also noted that although she is tight with Cynthia, it’s NeNe who’s “always gonna be my girl.”

“That’s my girl. Her and I have been friends for quite some time now. I met her at her boutique, and obviously we shared a bond, and we just, we connected,” Gail, who made numerous appearances on RHOA‘s 11th season, explained. “And so, obviously I try to support her as much as I can, and you know, she had a lot of pull, and a lot to say with me, you know, coming on the show last season. So, at the end of the day, you know, I’m always going to have her back.”

As rumors continue to swirl about Gail’s fate on the show, there is no confirmation that she‘s filming season 11 of RHOA as a friend or housewife. However, sources close to production previously told us that Gail is filming for the show’s next season. We’ll have to wait and see if Gail will get her very own peach!