Is Teresa Giudice taking a step to end her feud with ‘RHONJ’ co-star Jackie Goldschneider? She liked an Instagram post by her cast mate and now fans are wondering if they’re going to finally be friends.

Could a pair of shoes be the catalyst to bring Real Housewives of New Jersey stars Teresa Giudice and Jackie Goldschneider closer together? Jackie posted an Instagram photo on June 15 to tell fans “Life is short, BUY THE SHOES 💕💖” where in the photo she was wearing a pair of hot pink Alice & Olivia strappy heels that absolutely popped from her black leather pants and tank top while having a night out. She gained a surprising fan as Teresa actually commented on the pic with “🔥🔥🔥💕” which came as a shock to many because Teresa does not like Jackie, at all!

During the show’s reunion Teresa even called Jackie “obsessed” with her for when she showed up at a book signing before being cast on RHONJ. That wasn’t lost on fans of the show who noticed Teresa’s comment. A user named bulldog_mod asked “@teresagiudice you’re friends now?! I guess she’s no longer stalking you lol” under what she posted. Jackie replied back “@bulldog_mod people can be civil, right?” He wrote back “@jackiegoldschneider yes they can and they should be but it’s just surprising when it comes from certain ppl lol 🙄”

A user named legallyfab was all for Teresa warming up to Jackie finally, writing “@teresagiudice NOW, this is the Teresa we know. Embrace the newbie because Jackie is actually a sweetie!” Teresa was not at all welcoming to Jackie during her first season on the show and things were made worse when a photo of Jackie with her kids at one of Teresa’s book signings from years ago showed up online. 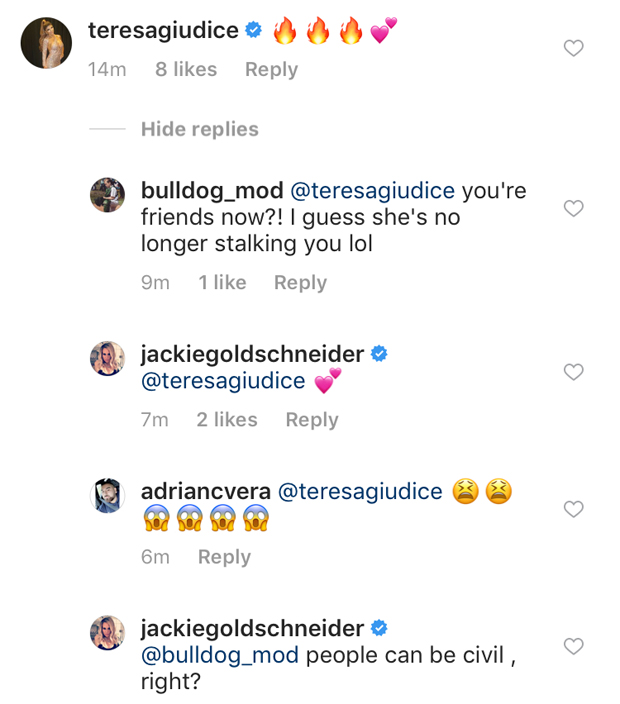 At the show’s reunion, the two got into it with Teresa telling Jackie, “You wanna be me thank you very much” to which the 43-year-old responded, “You have zero that I aspire to be Teresa.” The 46-year-old fired back That’s why you’ve been following me for 10 years. She used to stand at my book signings,” and called her a “stalker.” It was super tense so the fact that Teresa showed some kindness by liking and commenting on one of Jackie’s posts is surprising positive step.