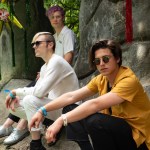 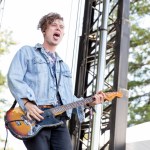 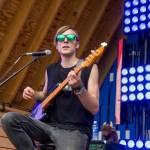 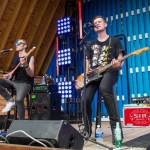 Rock-pop trio Dreamers were one of the acts to hit the stage at Gov Ball 2019 & HollywoodLife caught up with them after their set for an EXCLUSIVE interview!

Dreamers seem to have the equation to rock music success all figured out. Between heartfelt lyrics, infectious beats, and their energetic stage show, the trio have what it takes to go the long haul. So — it’s no surprise the band was tapped was to play Governors Ball 2019, one of the most highly-anticipated music festivals of the year! After the band hit the stage at the fest, HL caught up with the guys to hear all about their latest album, and much more!

“We’re extremely excited,” the band said when asked about playing the festival. The 2019 festival bill held no shortage of incredible performers including Lil Wayne, Tyler, The Creator, Major Lazer, Florence + The Machine, The 1975, and many more. “I can’t wait to see Florence and the Machine, I’ve always wanted to see her,” vocalist Nick Wold told HollywoodLife. “And The 1975 — we played a show with them, probably about a year ago. It was great, so, we’ll catch their set.”

The band released their most recent album, Launch Fly Land, in April of 2019, and dished on the inspiration behind the record. “It’s kind of a… we wrote it going through this crazy journey, since our first record came out, and we released an EP called Launch and then another one called Fly, and it’s kind of… I don’t know. We were all going through crazy shit in life, you know? Breakups, deaths in the family, but also great triumphs and successes at the same time. So it’s kind of an idea about, just the things that we go through and what it’s like to go through something and come out the other side and be stronger for it,” the band revealed. “And so the whole thing is Launch Fly Land, but it’s kind of the third installment, because we had the two EPs. So the album is kind of the landing phase, and it’s kind of a little happier vibe that’s coming out of it,” they explained.

While Dreamers were surely a standout performance at the fest, there was no denying that there were a few select acts that had everyone talking. A mosh pit-filled crowd for Brockhampton was almost nearly as exciting to watch as the boy band on-stage, and Florence captivated everyone in earshot of the fest with her endless, soaring vocals. Kacey Musgraves brought a little yee-haw to the fest while Jessie Reyez was one of the highlights when it came to the R&B vocalists on the bill.

However, whether it’s a small club, or a massive music festival, Dreamers’ fans can always expect them to rock the stage and leave their hearts on the floor. “We play all kinds of shows and it’s kind of the same goal, which is just transcend normal reality, normal life, and just rock,” the band told HollywoodLife.