Sofia Richie rocked frayed denim shorts for a lunch outing with boyfriend Scott Disick and his 9-year-old son, Mason on June 10! The crew headed to their regular spot, Nobu in Malibu, where Mason sported a stylish Fendi hat.

Sofia Richie, 20, and Scott Disick, 36, headed to Japanese hotspot, Nobu in Malibu for lunch on Monday, where they were joined by his eldest son, Mason Disick, 9. The model wore a pair of dark denim shorts with a yellow tank and white sneakers. Scott rocked blue jeans and a black tee with a navy blue puffer vest. Both Sofia and Scott donned similar black tinted sunnies. Meanwhile, Mason looked stylish in a brown Fendi bucket hat, which he paired with a camouflage shirt and grey sweatpants and sports slides.

All three were joined by an unidentified woman, who appeared to be a friend of the couple. It was no surprise that Scott and Sofia were spotted at the popular celeb restaurant, as Scott is a known regular at Nobu. His other two children, son Reign, 4, and daughter, Penelope, 6, were not present at the lunch outing.

Sofia and Scott’s day out with Mason came after Keeping Up With the Kardashians fans watched the model vacation with Kourtney Kardashian, the mother of Scott’s kids, during the June 9 episode of the hit show. During the episode, Scott, Sofia and Kourtney all traveled to Cabo right before Christmas for Mason’s 9th birthday. But, Kourtney’s famous family was thrown for a loop when they saw a photo of the exes and Sofia vacationing together on social media. Spoiler: Kourtney didn’t tell anyone about the trip. 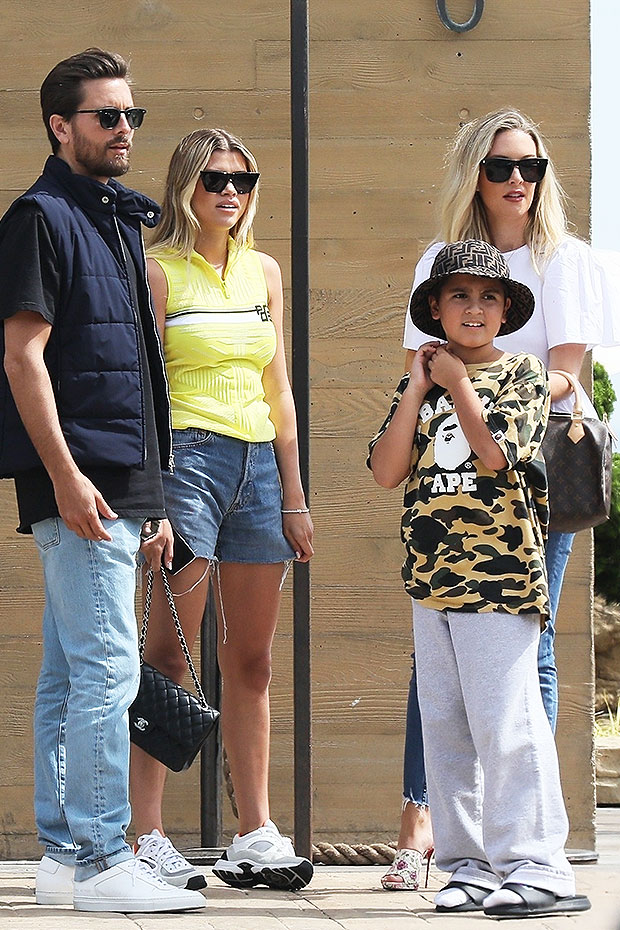 Scott Disick and girlfriend Sofia Richie out to lunch with his son, Mason at Nobu in Malibu on Monday, June 10, 2019. (Photo credit: BACKGRID)

Later on in the episode, Kourtney admitted that she didn’t mind hanging out with Sofia. “It was fine,” Kourtney said, explaining, “She’s, like, easy to be around. She’s not, like, causing [drama].” Kourt also noted that she stayed in a 3-bedroom villa with the kids, while Scott stayed with Sofia in a different building.

Scott and Sofia were first romantically linked in May 2017, when they were spotted getting cozying on a yacht in the south of France during the Cannes Film Festival. Sofia previously dated Justin Bieber, 23, in September 2016.