Katie Holmes, 40, and Suri Cruise, 13, were spotted on a casual stroll together in New York City on Monday. The actress and her look-a-like teenage daughter appeared to be in great spirits as they headed to a bakery for some sweet treats. Suri wore light blue sweats with a pale pink zip-up and white sneakers, as she carried her hot pink backpack. Meanwhile, Katie was a bit more dressed up in a long denim skirt and maroon leather boots. She wore a printed, v-neck long sleeve shirt that she tucked into her skirt.

The mother-daughter duo, who are known to be very close, were in the midst of a discussion when cameras caught them walking in the city. It’s unclear what they were chit-chatting about, but it could have had something to do with Katie’s ex and Suri’s dad, Tom Cruise. Why? — The usually private actor was thrust into the media on June 9, when Justin Bieber randomly challenged him to a boxing match, via Twitter.

“I wanna challenge Tom Cruise to fight in the octagon. Tom if you don’t take this fight your scared and you will never live it down. Who is willing to put on the fight?”, the singer wrote on Twitter. He even went as far as to tag UFC president, Dana White in hopes of making securing to the matchup. Although the tweet has since gained national notoriety, Dana has not responded. Tom, who does not have a Twitter account, has not responded, either. 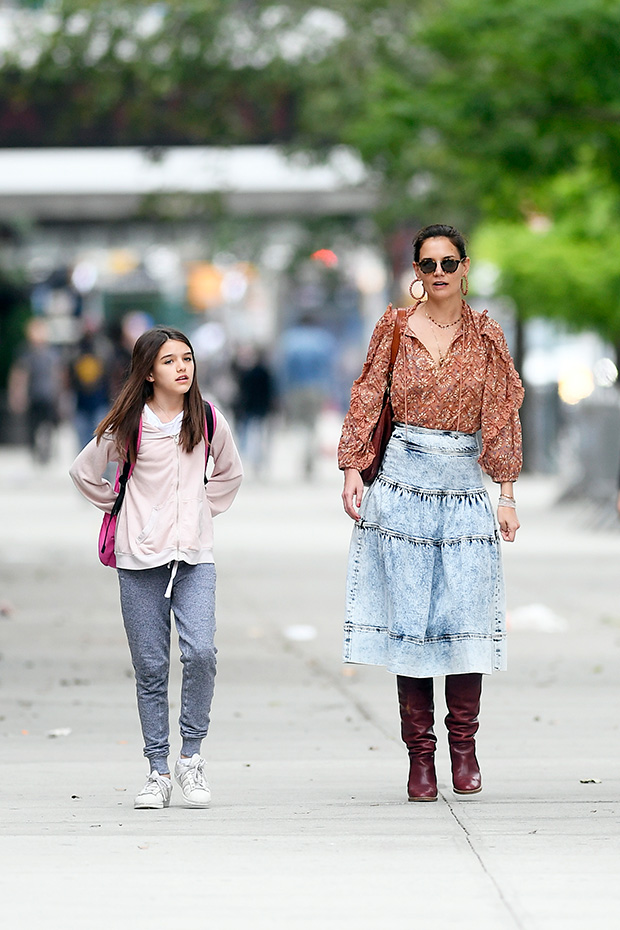 As for why JB would want to take on Tom in the octagon? — That still remains a mystery. The actor and singer do not have any known beef, that we know of. But, we’ll have to wait and see who makes the next move!