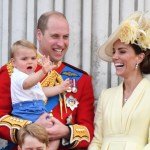 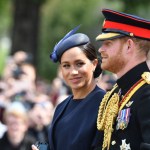 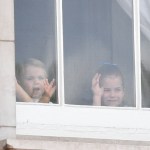 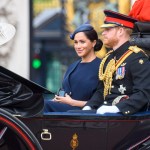 All hail Prince Louis! Kate Middleton and Prince William’s youngest joined the British royal family for Trooping The Colour for the first time, and he was unbelievably cute!

Prince William, 36, might be second in line for the crown, but on June 8, it was 1-year-old Prince Louis who ruled as “Cutest In The Entire United Kingdom.” The youngest child of Prince William and Kate Middleton, 37, joined his family – including Queen Elizabeth II, 93, — on the balcony of Buckingham Palace for his first Trooping The Colour. But before he joined his parents, William and Kate Middleton, outside, he watched the event from the Palace window with his older siblings, Princess Charlotte and Prince George.

When the entire family went out onto the balcony, Louis could be seen waving from his mother’s arms. Kate made sure he was taking in all the action by pointing up at the aircrafts over head. He glanced up, but quickly went back to waving at the crowd below. Adorable!

Prince Louis turned one-year-old on April 23, and his older sister, Princess Charlotte, 4, was about that age when she joined her father for the 2016 event. The young Charlotte showed off her regal wave, proving that she really is a member of the British royal family. Kate and William’s eldest, Prince George, 5, was two-years-old when he attended his first Trooping the Colour in 2015. With the way that things are going, royalists can expect to see Prince Harry and Meghan Markle’s newborn, Archie Harrison Mountbatten-Windsor, will likely show up at the 2020 Trooping The Colour.

Prince Charlotte had an emotional moment at last year’s event. The young girl took a nasty tumble on the balcony. While Kate, who swooped in to pick up her little girl, comforted Charlotte, the young royal had a bit of a cry during the military flyover. After that burst of emotion, Charlotte seemed to feel much better and had fun for the rest of the event.

Trooping the Colour is also known as the Queen’s Birthday Parade, because it is an annual military parade to mark the reigning monarch’s official birthday, according to ABC News. Over 1,400 soldiers take part in the parade, with more than 200 of them mounted on horses. There are about ten military bands, made up of roughly 400 musicians, and they all perform marching tunes. It, according to ABC News, is “British military pageantry at its best.”

The name is based on an old military practice. The “Colour” refers to the flag used to mark a regiment’s position on the battlefield. Each regiment would congregate around its Colour, and young officers would march in between the ranks while holding these flags high enough so that soldiers would know where to position themselves. The practice is called “Trooping the Colour.” During this event, the Queen is greeted by a royal salute from the soldiers of the Household Division, which contains seven regiments: The Life Guards, The Blues and Royals, The Grenadier Guards, the Coldstream Guards, the Scots Guards, the Irish Guards, and the Welsh Guards. While all that pomp is proper and refined, the real star of the show (at least, this show) was Prince Louis.