Wendy Williams is living her best single life! The talk show host was spotted leaving Craig’s in West Hollywood with a mystery man on June 6. And, she was pictured wearing a massive diamond ring on her left hand, as her divorce is still being finalized.

Wendy Williams, 54, is single and clearly ready to mingle! And, that’s something she’s even admitted after she filed for divorce from Kevin Hunter in April. The daytime talk show host was seen all smiles leaving Craig’s in West Hollywood with an unidentified man on Thursday night. They were spotted sharing a happy moment as they exited the popular restaurant after a dinner date.

The newly single host showed off her tiny frame in a cleavage-baring beige dress and white sneakers. She wore a long beaded shawl over her outfit and carried white Chanel bag. Wendy, who loves a good wig, wore her blonde locks down and straight. The mother of one also made heads turn with her giant diamond ring, which she sported on her left hand. However, the ring candy isn’t anything to get too excited about, as Wendy has worn the same rock on her daily talk show.

As for her mystery dinner date? — His identity remains unknown. But, he looked quite happy to be escorting the smiling host out of the restaurant. He too was pictured smiling from ear to ear. The man was dressed in dark pants and blue button-up with a vest over it. And, he wore glasses. 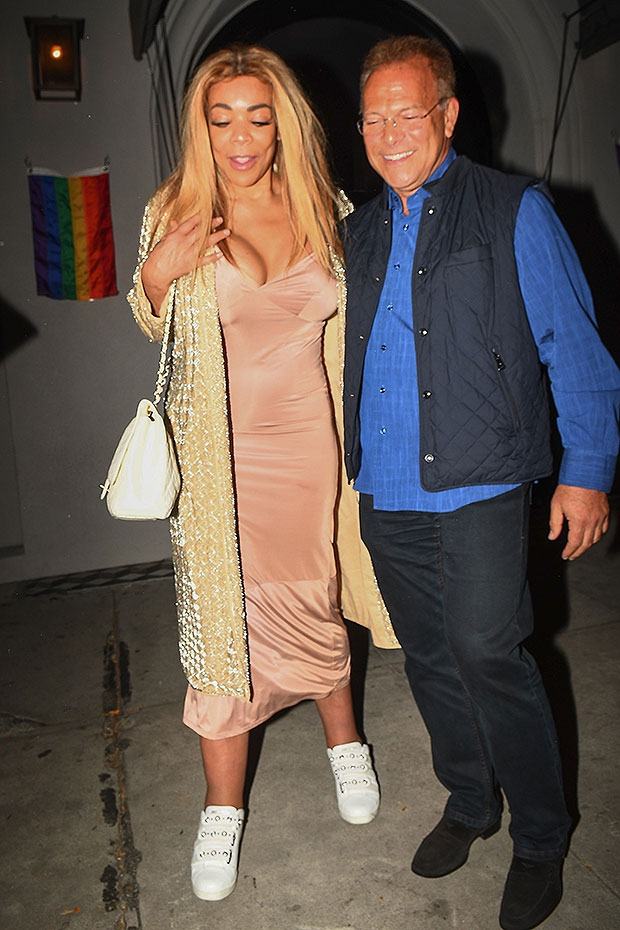 Wendy’s night out came just a few days after a source close to her told HollywoodLife that she’s loving her newfound independence and booming social life. “Wendy has a new lease on life and she never imagined how incredible she’d feel after moving on from her marriage to Kevin,” the insider said, adding that she feels “unstoppable.”

Although she’s certainly focused on living life for her, as well as her son, Kevin Jr. 19, Wendy is still open to finding love again. “Wendy feels incredibly sexy and she’s started getting out there again and dating. She’s enjoying seeing what’s out there and is open to falling in love again,” the source explained. But, she’s not putting a time table on anything. “It may be sooner than later that she finds someone. For now, she’s having fun rediscovering herself and her feminine power.”

Wendy became a hot topic in the news when she revealed on her show in March that she had been living in a sober home in Queens, New York for addiction. Just weeks after her admission, Wendy served her now estranged husband, Kevin with divorce documents on April 10. They were married for nearly 22 years. Now, she’s living in what she calls her “bachelorette pad” in New York City, and she’s admittedly “dating, often.”