Nicolas Cage, 55, tied the knot with Erika Koike, 34, in Las Vegas in March, but he has already divorced her. And just a few days after their quickie marriage (four days to be exact) was officially over, the Mandy star enjoyed a day out with his ex-wife Alice Kim, 35. The couple, who split in 2016 after 12 years together, were photographed taking their son Kal-el Coppola Cage, 13, shopping at the Magic Apple.Nicolas, who looked sharp in a grey plaid blazer and black jeans, treated his son to a book and deck of cards at the magic shop.

Nicolas, who looked sharp in a grey plaid blazer and black jeans, treated his son to a book and deck of cards at the magic shop. Nicolas appeared to be very relaxed on his day out with his son and ex-wife. But the past few months have been anything but calm for the Leaving Las Vegas star. 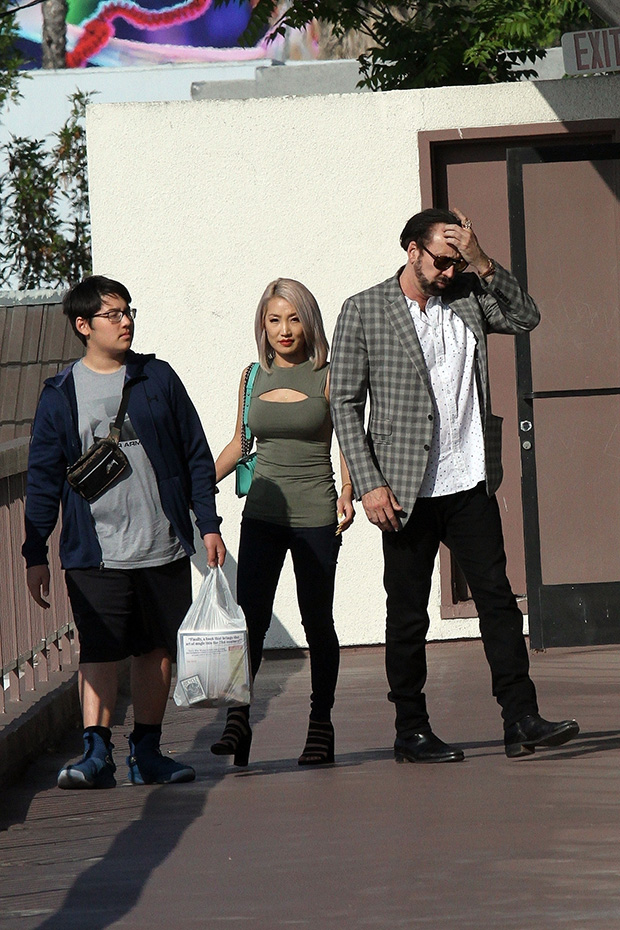 Back in March, Nicolas married his fourth wife Erika in a Las Vegas wedding, but four days later, on March 27, he tried to have the marriage annulled. He claimed that he “lacked understanding” of what was going on when he said “I do” to because he had been “drinking to the point of intoxication,” according to documents obtained by The Blast. Nicolas also accused his then-girlfriend of not disclosing “the full nature and extent of her relationship with another person,” and that she didn’t disclose her alleged “criminal history.”

“Nic did what he did,” Erika said about their short-lived marriage. “We’re not going to reconcile or get back together. Nic could have come to me and talked to me, not publicly humiliate me. I’m hurt and mistreated, it’s unfair, but the case is sealed, and my lawyer won’t let me speak until we are all done.”  To make things even worse for Nic, Erika requested spousal support, even though she and the Con Air star were married for less than a week. Nic didn’t get his annulment, but on May 31 a Nevada judge did grant the couple a divorce. Nicolas was previously married to Patricia Arquette, Lisa Marie Presley, and Alice Kim.