Justin Bieber and Hailey Baldwin finally put wedding rings on. The couple tied the knot in Sept. 2018, but they just started wearing matching Cartier wedding bands. So, why now?

Justin Bieber, 25, and Hailey Baldwin, 22, picked out matching platinum wedding bands at Cartier’s Beverly Hills location on May 26 — nearly nine months after their Sept. 2018 wedding at a New York City courthouse. And while the pair had planned to hold off on wearing wedding bands until they exchanged them during an official celebration later this year, a source close to Justin tells HollywoodLife EXCLUSIVELY that he’s got a very good reason for changing his mind.

“Justin wants to send a loud and clear message to everyone that he is fully committed to Hailey and very married,” explains our source. “This is his way of shouting it from the rooftops, it is very significant. He isn’t wearing it 24/7, he’s just not that much of a jewelry guy, but he has been wearing it a lot, he wants everyone to know how proud he is to be Hailey’s husband.”

Hardware on her ring finger is nothing new for Hailey — she’s been rocking her massive oval engagement ring since Justin popped the question in July 2018. But having a matching ring with her man is symbolic says a source close to the top model. “Hailey loves that they are both wearing rings. She’s been wearing her engagement ring of course, but now she and Justin have matching rings, it means a lot to her because it’s a symbol of their commitment.” 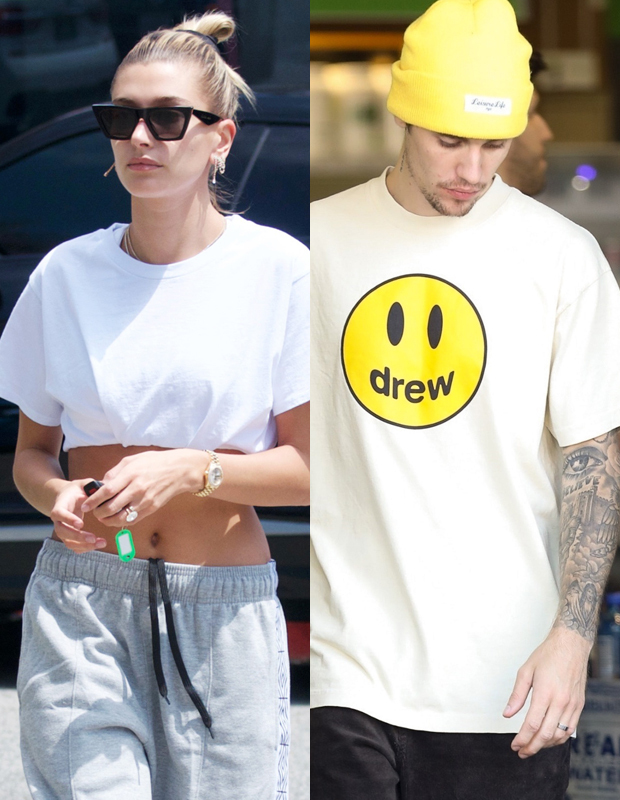 Hopefully this new symbol of their commitment will be enough to get the internet trolls to stop with the constant comments about Justin’s past relationship with Selena Gomez, 26. Although Hailey has remained relatively quiet about the on-line harassment she receives from “obsessive” Jelena fans, she did clap back recently. In a now deleted post on Instagram, she wrote: “You little internet kiddos need to learn how to move on for real. We’re adults that have better things to do than waste time explaining something just so you can stop your delusional fantasies.”

Hailey added: “I’m not gonna sit here and let obsessive strangers try to tell me about my own husband, you wanna talk about somebodies [sic] husband then get ur own.” She has since removed the message, which was shared on April 25, but if she needs to clap back in the future we suggest holding up her Cartier adorned finger.