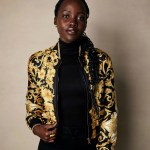 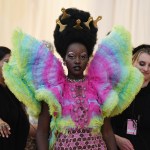 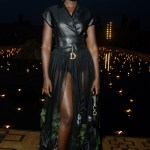 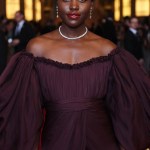 Another day, another flirty exchange between Lupita Nyong’o and Michael B. Jordan. This time, Michael posed in an artsy ad, but Lupita couldn’t help but notice that her co-star was a piece of art himself!

Lupita Nyong’o, 36, and Michael B. Jordan, 32, are playing with our emotions again. In the latest entry into the archives of the Black Panther co-stars’ flirtatious history, Lupita left an emoji-heavy comment under Michael’s dashing Instagram photo on June 4. The post was an ad for the Veuve Clicquot champagne house, and so Michael suited up and sat in front of an impressionist painting [PICTURED HERE]. Seeing Michael in dress pants for a French-themed photo was too much for Lupita to handle, as she commented, “Now you’re just showing off! 😍😘😍😘.”

Lupita’s heart-eyed emojis didn’t help fans who are already waiting for a relationship to happen. “I’m just waiting for you and @michaelbjordan to hook up already! 💙💙,” one such follower wrote, and another commented, “…And there is no doubt that MBJ is your perfect match. Just saying. The chemistry between the two of you off screen is palpable. Someday we will hear of you two as a couple… I am sure of it.” You’re putting ideas into people’s heads, Lupita and Michael!

Lupita and Michael have been getting fans’ hopes up ever since they began doing publicity rounds for Black Panther in early 2018. From their never-ending string of bets to that one staged makeout session in the InStyle & Warner Bros after-party photo booth on Jan. 6, these two know how to tug at our heart strings.

No matter how many compliments and flirty tweets Michael and Lupita exchange, however, the co-stars’ relationship remains platonic. “Michael and Lupita are having fun with all the relationship rumors, but Michael especially loves being a single guy,” a source close to Michael EXCLUSIVELY told HollywoodLife, after the latest round of dating rumors circulated following the 2019 Golden Globes in January. Our insider added, “He really loves having options. Lupita is a beautiful person to him, but they are way too good of friends to go any further.” MBJ has also confirmed that he and Lupita are strictly friends in the past!