It’s the CMT Awards — a night of great music, yee-haws and fierce looks! Early on the carpet was Danielle Bradbery who stunned in a plunging mini dress that featured neatly placed silver fringe. Her platinum hair was slicked back in a bun and she looked totally chic! The one and only Brandi Carlile was also on the CMT Awards carpet rocking an intricate jacket, for which she’s known to have several of! The nominated genre-crossing artist appeared to have gone full country, adding heeled cowboy boots to complete to look! Carly Pearce arrived in style, wearing a mini sparkling number with her hair in a half-up, half-down style! This may be one of our favorite looks from her, yet!

In the couples department, singer Chris Lane and former Bachelor contestant Lauren Bushnell were clearly smitten with each other as they arrived to the CMT Awards. Lauren wore a bright white two piece look, while Chris opted for an all-black get-up. Kelsea Ballerini arrived in an another all-white gown, looking absolutely stunning. Her man, country crooner Morgan Evans, was also dapper in a tan jacket and matching trousers. Jessie James Decker rocked a mini pink strapless dress with her #1 fan and hubbie Eric Decker, wearing a shirt with her face on it!

Last year, Carrie Underwood was obviously at the top of our best dressed list, per usual, with her multiple outfit changes from the red carpet to the stage. Recall the mother of two wore a mini, plunging yellow dress with her signature blonde blowout. She then changed into a body suit with black fringe for her performance of “Cry Pretty,” and then swapped looks again into a silver jumpsuit to accept her award for Best Female Video for “The Champion.” 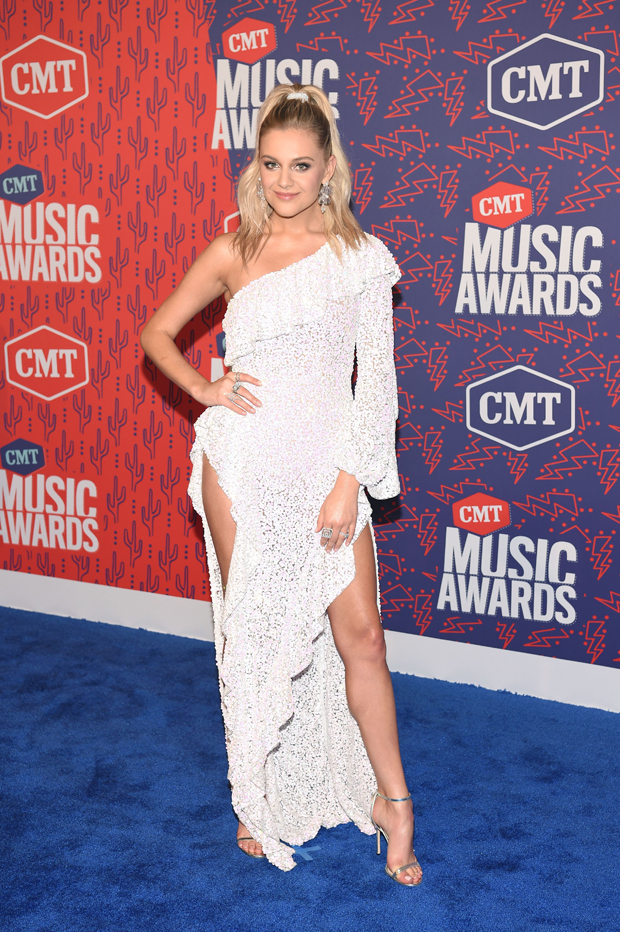 Another fierce fashionista from last year was Kelsea Ballerini, who stunned on the red carpet in a two-piece sequin black look! The “Miss Me More” singer slicked her blonde bob back straight and was a total smokeshow! Lindsey Vonn was also looking red hot in a cut-out, one shoulder red gown, which she wore to present at last year’s CMT Music Awards.

Tonight’s show, which airs live on CMT at 8 PM ET, will see all of country music’s biggest stars take the stage with the support of their biggest fans! The biggest, fan-voted award of the night is the 2019 Video Of The Year award, which has been narrowed down to 5 contenders! Carrie Underwood (“Cry Pretty”), Keith Urban ft. Julia Michaels (“Coming Home”), Kane Brown (“Good As You”), Luke Combs (“She Got The Best Of Me”) and Kelsea Ballerini (“Miss Me More”) are all going head-to-head for the major honor! You’ll have to tune in to find out who takes it home!