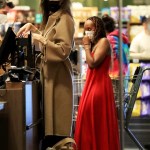 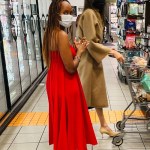 Call it the ‘New Mexico Miracle.’ After Angelina Jolie relocated her family out to New Mexico while she films a new flick, we’ve EXCLUSIVELY learned she’s open to having her ex, Brad Pitt, come pay a visit.

They don’t call it the “land of Enchantment” for nothing, as it seems New Mexico magically defrosted any remaining coldness between Angelina Jolie, 44, and Brad Pitt, 55. Angie has set up a second home in Albuquerque while she films Those Who Wish Me Dead out in the desert, and she brought her entire family out with her. Even though they just got to New Mexico, Angie and the kids — Maddox, 17, Pax, 15, Zahara, 14, Shiloh, 12, twins Knox and Vivienne, 10 – may have a new visitor join them: Brad! “Right now Angie is shuttling the kids back and forth between New Mexico and LA so they can still see their dad for their scheduled visits,” a source close to Angie tells HollywoodLife EXCLUSIVELY. “She would welcome him coming to New Mexico to see the kids.”

So, what happened? After the contentious split between Brad and Angie in September 2016, and the prolonged back-and-forth in the courts, it seemed as if these two would always be at odds. “She and Brad are in a much better place,” the insider tells HollywoodLife, explaining why Angie has had a change of heart, “so that’s something she would be fine with.” However, don’t get too excited, as the insider says that of now, “there is no plan for that to happen.”

Maybe Brad will pop by when his new movie, Once Upon a Time In Hollywood, plays the Flix Brewhouse in Albuquerque. If Brad gets his way, he’ll be spending a lot of time in New Mexico this summer. “Brad loves his kids,” a Brad insider EXCLUSIVELY tells HollywoodLife. “He wants to talk to them and see them as much as possible — and he is always working on the next time he will do that. He finds that getting to a great place with his kids is what it is all about and something of the utmost importance to him. Brad’s goal is to get along with everyone and be the best Dad possible so they can all enjoy each others company and have love for each other forever.”

Angie and the kids were seen touching down in Albuquerque on May 15, as an eyewitness told HollywoodLife about Angie’s New Mexican summer vacation. “[Angelina’s kids] love going on location with her, it’s what they’ve always known,” the source said. They’re spending the majority of their time in Albuquerque now, but they’ve already made several trips back to LA.” The insider also says that where they’re living, there’s “lots of privacy and extra freedom to live a normal life… It’s very obvious that they’re enjoying the change because they’ve all been smiling so much more lately.”