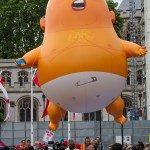 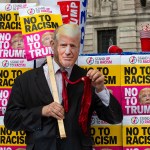 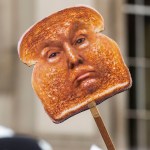 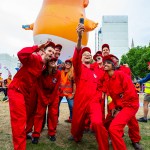 Thousands of passionate protestors rallied against Donald Trump during his state visit to the UK on June 4, taking to the streets (and the skies) as the president met with PM Theresa May.

Welcome to the “Carnival of Resistance.” As American President Donald Trump, 72, began his second day in the United Kingdom on June 4, thousands upon thousands of protestors took to the streets to rally against him, using signs that read “Climate Change is real, your tan is not,” chants — and the infamous “Trump Baby” blimp, of course. The protest, while smaller in size than the July 2018 gathering during his first state visit to the UK, was massive, overshadowing his joint press conference with lame duck Prime Minister Theresa May, 62. Nearly 9000 signed up for the day of protests, organized by the “Together Against Trump” organization. A packed and fired up crowd formed in the early morning in Trafalgar Square, declared to be Tuesday’s “Trump-free zone” by the group, and later marched to a rally in Whitehall, and through the streets of Downtown London. The protest’s official objective was to condemn “Trump’s racism,” and was to “feature themed areas throughout the protest with climate justice, migrants’ rights, anti-racism, Women’s rights, LGBT rights, anti-war and trade union rights and many more.”

The leader of Britain’s Labour Party, Jeremy Corbyn, fueled the crowds in the street with a passionate speech. Corbyn defended London mayor Sadiq Khan, whom Trump called a “stone cold loser” on Twitter just moments before landing in England on June 3. He never mentioned Trump by name, but told the crowd in Westminster, “I’m proud that our city has a Muslim mayor,” [and] “that we can chase down Islamophobia, anti-Semitism, any form of racism within our society.” Trump earlier claimed that Corbyn asked to meet with him, but the Labour Party leader said that he actually boycotted the state dinner. And yes, the “Trump Baby” balloon was back. The inflatable Trump in diapers, smartphone in hand, floated in London’s sky during Trump’s 2018 state visit, and it once again sailed among the clouds on Tuesday morning.

This year, the pièce de résistance was a peculiar robot: Trump, wearing a MAGA hat while sitting with his pants around his ankles on a golden toilet. The “president” tweets on his smartphone while repeating “fake news” and “witch hunt.” Look closely, and his hat actually says “Make America Great Again, Impeach Me!” Trump denied that the protest was even happening, calling it “fake news” during a press conference with May as the demonstrators clearly rallied outside. “Coming over today, there were thousands of people cheering,” Trump said. “And then I heard that there were protests, and I said, ‘Where are the protests? I don’t see any protests.’ I did see a small protest when I came today; very small. So, a lot of it is fake news, I hate to say. But you saw the people waving the American flag, waving your flag. It was tremendous spirit; there was love, great love.”

The protests began on Monday, June 3, outside of Buckingham Palace ahead of Trump’s visit with the royal family. The turnout was of a much smaller scale (estimated to just be over 100 protesters), and most people gathered outside the palace’s gates were reportedly tourists. Among those who were there to decry Trump’s politics, a pink sign from “Stand Up Against Racism” was common among the sea of signs.

One of the centerpieces of the London protests. Trump on a golden commode, and it talks, says “fake news” and “witch hunt” pic.twitter.com/AFiGhbXVGA

Trump calls the protests against him "fake news." Meanwhile, @MSNBC just reported "that's really not the case. There are quite a lot of protesters."

Trump claimed he saw thousands cheering for him. @MSNBC just reported: "I'm not seeing what the president saw."
Vid via BBC pic.twitter.com/iCZ4JxK3lB

Trump’s state visit was a family affair, as his wife Melania Trump, 45, and children Ivanka, 37, Tiffany, 25, Donald Jr., 41, and Eric, 35, all made the trip to attend a lavish banquet hosted by Queen Elizabeth II on June 3. The youngest Trump — Barron, 13 — stayed home across the pond.