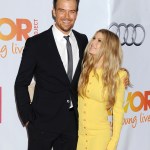 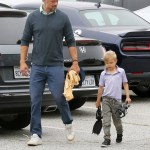 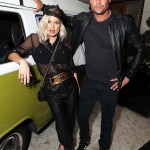 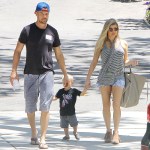 Josh Duhamel stepped out for an outing with his five-year-old son Axl in Los Angeles on June 1, and he looked like a proud papa as he smiled and walked alongside the tot.

Josh Duhamel, 46, proved he’s making his son Axl, 5, a priority in the midst of his divorce when he joined the tot for a fun outing in Los Angeles on June 1. The hunky actor looked comfortable and happy in a dark blue long-sleeved shirt and blue pants for the outing while little Axl wore a purple and white striped polo shirt and gray pants. The adorable father and son walked beside each other in a parking lot and Josh couldn’t help but look down at his tow-headed cutie and smile.

Josh and Axl’s outing comes one day after Josh’s ex and Axl’s mom, Fergie, 44, made headlines for reportedly officially filing for divorce from the Love, Simon star. Although the former couple, who married in 2009, separated in 2017, the divorce proceedings hadn’t begun yet but Fergie’s latest move proves that she’s ready to move on with her life and make things legal. That doesn’t mean there’s any animosity toward the former husband and wife though. In fact, they have been seen together various times since their split and always appear friendly, even hugging in public.

Like Fergie, it appears Josh is ready to move on as well. He was recently seen on a dinner date with model Audra Mai, 26, who earned the title of Miss World America in 2016, just four days before Fergie’s divorce filing. Although the two were careful not to show off any PDA during their outing, they did walk pretty close to each other while outside the restaurant and appeared comfortable around one another.

Before Audra, Josh was rumored to be dating Rebekah Graf, 36, in Feb. No matter who Josh decides to date, though, it’s clear that Axl is his number one and we love seeing them out together!