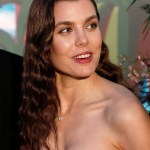 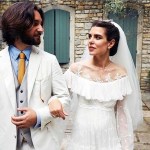 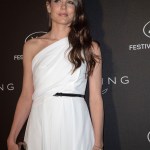 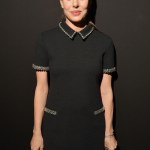 The late Princess Grace of Monaco’s granddaughter Charlotte Casiraghi made for the most beautiful bride. She wore gorgeous lace dress to wed film producer Dimitri Rassam on June 1.

With a grandmother as beautiful as the late Grace Kelly — later Princess Grace of Monaco — there was little doubt that Charlotte Casiraghi would be stunning royal bride. The 32-year-old wed French film producer Dimitri Rassam, 37, at the Prince’s Palace of Monaco on June 1 and her gown was simply perfection. The dress was Saint Laurent by Anthony Vaccarello and was made of lace brocade that featured three large bows down the front. The elegant frock’s length went to just above Charlotte’s knee while having long sleeves and you can see it here. Many have compared it to the champagne brocade dress that Grace wore in her civil ceremony to Prince Rainier III in 1956.

The intimate ceremony was attended by Charlotte’s mother Princess Caroline, her uncle Prince Albert and his wife Princess Charlene and their children, twins Princess Gabriella and Prince Jacques, as well as her aunt, Princess Stéphanie. Charlotte’s brothers Andrea and Pierre Casiraghi, also made sure to be there for their sister’s big day. Sadly, Charlotte’s father Stefano was killed in a boating accident when she was only four-years-old. The couple married in civil ceremony inside the palace, with a private picnic-style outdoor luncheon that followed the nuptials. Then the action moved on into the evening where guests headed to the to the Monte Carlo Beach Hotel for a formal dinner and dancing to get the party going.

Charlotte and Dimitri have known each other for years but began dating in 2016. They got engaged in 2018 but held off getting married until the birth of their son Balthazar, who is now seven-months old. Charlotte also has a five-year-old son Raphael from her relationship with French comedian Gad Elmeleh. Charlotte is 11th in line for succession to the Monégasque throne, and by marrying Dimitri, their son now holds a place in line as well. While Charlotte is a private citizen, she occasionally represents Monaco’s royal family at events in the tiny principality.