Wendy Williams, 54, was in great spirits when photographers caught a glimpse of her out in New York City on Thursday. The daytime talk show host stepped out solo in a plunging black maxi dress with an oversized zip-up sweater of the same color. Wendy hit the city streets in white sneakers as she accessorized with tinted sunnies and a light-colored Chanel bag. — See her full look, below!

The newly single host was all smiles in the new photos, which also showed a massive diamond ring on her left hand. However, fans of Wendy will know that it’s not her wedding ring from ex, Kevin Hunter, who she filed for divorce from in early April. Wendy has worn the ring prior to her Thursday outing.

She was most likely in good spirits since The Wendy Williams Show is currently on a vacation break until July 8. Wendy made the announcement this week during her “Hot Topics” segment and expressed how she and her staff were excited for some much-needed time off. She also revealed that she will be spending time with her son, Kevin Jr., 19, who was recently arrested after an altercation in West Orange, New Jersey. 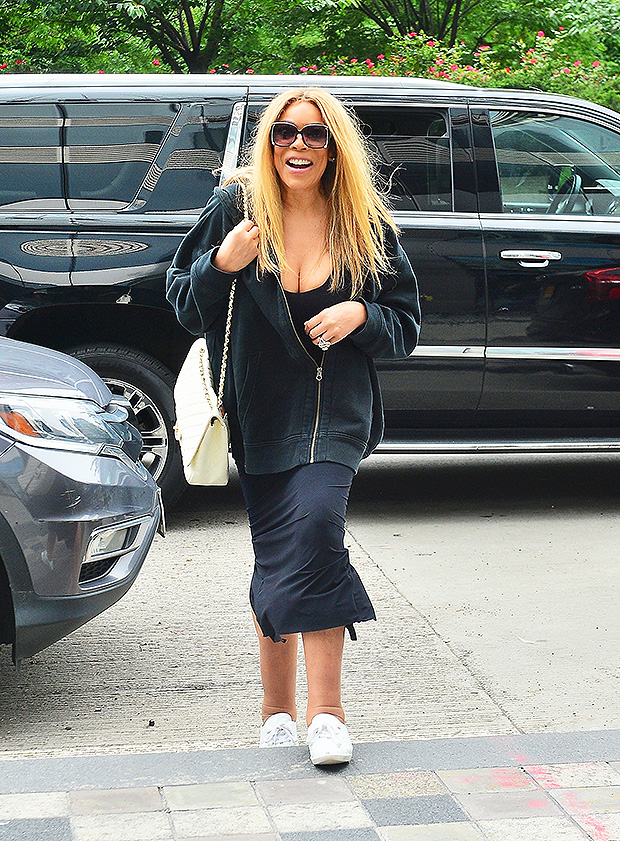 Wendy Williams smiles while out and about in New York City on Thursday, May 30, 2019. (Photo credit: BACKGRID)

Police were called after Kevin, who just completed his freshman year in college, was involved in alleged altercation in a parking lot on the night of May 21. He was later charged with assault.

A representative from the Essex County Prosecutor‘s Office told HollywoodLife the following: “I can confirm that Kevin Hunter Jr. was arrested on May 21 in West Orange, NJ. There is an ongoing investigation and right now he’s charged with simple assault. At this point the matter is in the family court, but those proceedings are not open to the public.”

When news of the incident broke, it was reported that Kevin Jr. got into an altercation with his father, Kevin Sr. However, police could not confirm that detail to us. Nonetheless, Kevin Sr., a former producer on the Wendy Show before he was let go following Wendy’s divorce filing gave TMZ (who was first to report the news) the following statement: “I love my son very much and I will not be pursuing this matter legally. Things are not always how they appear.”

Wendy started making headlines in March when she revealed on her show that she had been living in a sober home in Queens, New York for addiction. Just weeks after her admission, Wendy served Kevin Sr. with divorce documents on April 10. The couple was married for nearly 22 years, and Kevin Jr. is their only child together. Since the filing, Wendy has opened up about how she is loving her new single life and said that she is “dating, often.” She is now living in an apartment in New York City with her son.