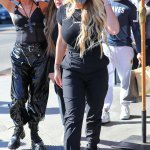 A new pic of Ariana and Brielle Biermann proves that the genes are strong in Kim Zolciak’s household. The reality TV star siblings look just like twins with matching hair and pouts.

Brielle Biermann, 21, and her sister Ariana, 21, look like twins in a new photograph that the younger sibling posted on her Instagram page on May 31. Ariana shared a pic of them posing next to each other, sporting matching blonde hair and pouty lips. In the photo Brielle’s wearing a black top and leggings. Ariana is even more casual in a pair of Daisy Dukes and a crop top. She captioned the picture, “My bestie bobcat.”

Brielle was quick to share the love and responded to her sister with her own sweet message, “I love you chelga.” The pic was just one of a series of photos that Ariana shared from the same shoot. She also posted solo shots of herself, wearing the same outfit and makeup. “So obsessed thank u queen @hairby_chrissy ♥️ (wearing tiramisu lip kit),” she captioned another Instagram post, tagging Arizona-based hairstylist Chrissy Rasmussen, who appears to be responsible for their sun-kissed locks.

Ariana’s fans loved the glam shots. “U guys are the bomb.com,” one follower wrote. “Wow you both are stunning!!!” another person added. Another fan wrote, “Sister goals😍.” Over on her Instagram page Brielle shared pics of herself that were taken during the very same photo shoot. “I just keep getting happier & prettier,” she captioned the photo, which she posted on May 30.

I just keep getting happier & prettier

When it comes to their pout and blonde tresses, Ariana and Brielle are clearly inspired by their mama, Kim Zolciak, 41. On May 26, Brielle and the former Real Housewives of Atlanta star posed for a mother and daughter shot, which the mom-of-six posted on her Instagram page. Brielle and Kim looked virtually identical thanks to their wavy blonde hair extensions and inflated lips. Even their eye makeup was a mirror image. The Real Housewives Of Orange County star Gretchen Rossi, 40, fully approved of the post. She wrote, “Such beauties!!!”