Mandy Moore is celebrating a huge accomplishment after she made it to Base Camp on Mt. Everest on May 26! The actress spent more than a week trekking through the Nepal terrain to reach her goal, and the photos are incredible!

Mandy Moore, 35, can officially check off a huge goal on her bucket list, that some only wish to accomplish. The This Is Us star hiked for over a week through Nepal before reaching the Base Camp on Mt. Everest at 17,700 feet. Mandy experienced the thrilling adventure with Eddie Bauer, and she was joined by friends Ashley Streicher and Chase Weideman, as well as their guide Melissa Arnot Reid, who Mandy noted is “the first American Woman to ascend and descend Everest without oxygen.” — See the amazing photos below!

The actress made the intense trek during a deadly year for mountain climbers who’ve attempted to take on the task. Just this year, 11 people have died trying to climb the mountain. Mandy reflected on her experience in multiple posts on Instagram, where she showcased the beautiful scenic views during her journey.

“There’s no way to distill this experience down to a few sentences. There’s no way to encapsulate what coursed through our veins and brains living in the mountains this past week. It will come in time,” Mandy began. “I think I’m slowly learning that I feel most like me when I’m outdoors. It’s couldn’t be any more outside my every day realm and yet there’s something entirely refreshing about being tasked with nothing more than breathing and slowly putting one foot in front of the other.” 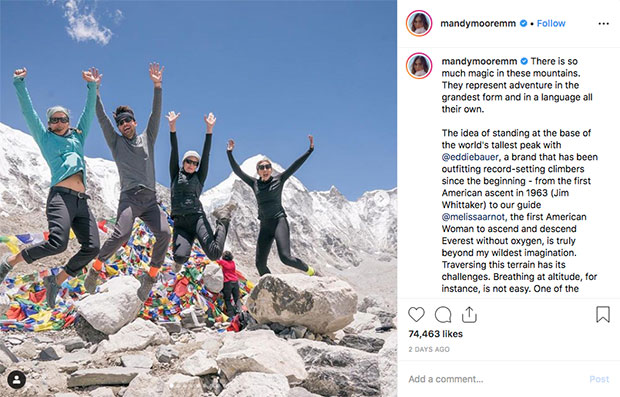 Mandy went on to explain how the journey was not an easy feat. “Traversing this terrain has its challenges. Breathing at altitude, for instance, is not easy,” she wrote. “…Besides hydration and staying nourished, breathing is THE vital key in the fight against altitude sickness. It’s also a major takeaway that I will be employing back to the real world whether I’m in the midst of a tough workout or a weird day. Mind blown.” 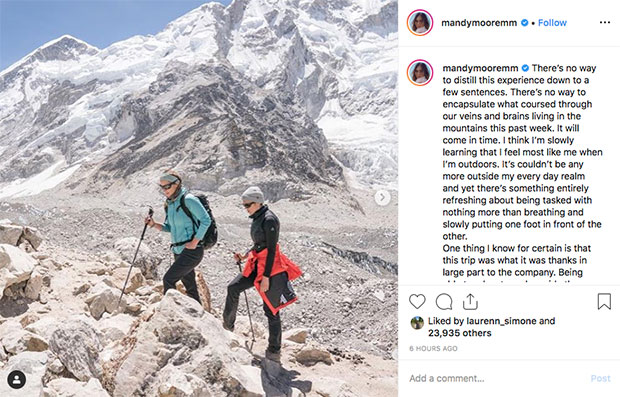 “There is so much magic in these mountains,” Mandy continued. “They represent adventure in the grandest form and in a language all their own.”

The actress also paid tribute to those who’ve lost their lives trying to climb Mt. Everest. “It’s impossible to be lucky enough to arrive at the foot of these mammoth peaks and not be attuned to the palpable energy of all of those who came before and lost their lives in these mountains,” she wrote, before reflecting on the range of emotions she experienced on during the climb.

“The wave of emotion: respect, reverence, appreciation….that washed over us as we took in the prayer flags and yellow domed tents of basecamp AND sat on the rocks regarding the chortens that dot the hillside of the Tukla Pass the day before, profoundly,” Mandy shared.