It seems like just yesterday Arie Luyendyk Jr., 37, was The Bachelor on the hit ABC show — but now he’s a dad! That’s right, the reality star’s wife Lauren Burnham, 27, gave birth to the couple’s first baby together on May 29, he revealed on Instagram Wednesday afternoon. “We have a healthy BEAUTIFUL baby girl 6lbs, 13oz long. Mommy and baby are doing great, we are so incredibly happy,” he wrote in an Instagram story on his page. So exciting! They announced that they were expecting pretty early on in their pregnancy so Bachelor Nation has had a long wait from a baby bump to the baby’s birth. But now Arie and Lauren’s bundle of joy is here, and we bet they’re pumped! They sure seemed thrilled when they first found out they were expecting. “We weren’t trying, but we are so excited,” the mom-to-be said at the time. “It’s going to be a whole new chapter in our lives.”

Lauren and Arie’s exciting pregnancy news came after they’d set a wedding date and location — January 2019 in Hawaii, less than a year after they got engaged. Lauren was pregnant at the wedding, but her bump was so tiny at the time, and she looked amazing in her gorgeous gown. It was quite a journey to the altar for Arie and Lauren, as she was originally the runner-up on his season of The Bachelor. He actually proposed to Becca Kufrin during the show’s final rose episode, which was filmed at the end of 2017. However, after just a couple of months, Arie realized he still had feelings for Lauren, so he ended things with Becca and got back together with the 27-year-old. He eventually proposed to her in March 2018 at the live After the Final Rose special, where Becca was also announced as the next star of The Bachelorette.

Of course, Arie’s decision sparked major backlash, but even the haters can’t deny that he and Lauren are super cute together! In their pregnancy announcement, for starters, the reality stars were locking lips and holding up their baby’s first sonogram shots. Aw! 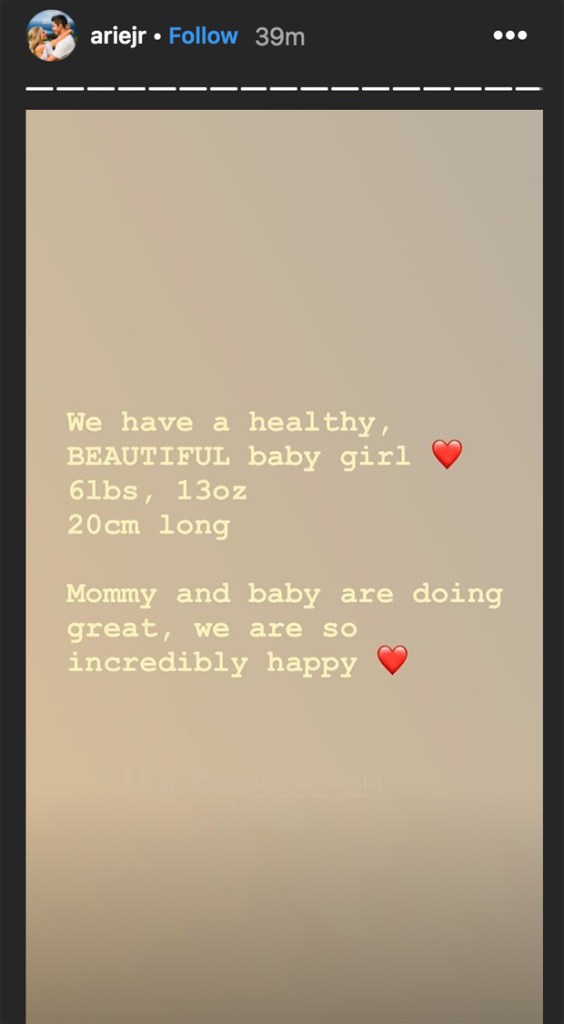 Now their new adventure is just beginning, and we couldn’t be happier for them. Sending our congrats to the new family of three!