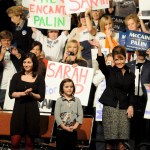 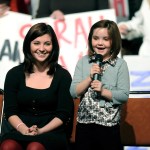 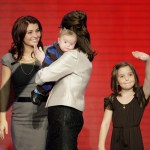 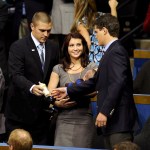 Sarah Palin has two new grandbabies on the way. Her 24-year-old daughter Willow is expecting twins with her husband, Ricky Bailey.

Willow Palin, 24, and husband Ricky Bailey don’t just have one baby on the way. The couple is expecting twins. Willow revealed the exciting news via Instagram on May 27. “@rickyb901 and I are so excited to welcome TWO little babies into this world! Baby Bailey’s arriving December 2019,” she captioned her Instagram photo of a sonogram and two adorable onesies. She also had the quote “and then there were four” framed in the picture.

Willow’s mom, Sarah Palin, 55, the former governor of Alaska and 2008 Republican vice presidential candidate, commented on Willow’s post, “ECSTATIC & BLESSED x2.” She is one excited grandmother! Teen Mom 2 star Kailyn Lowry also showed her love for Willow. “Congrats!!! Baby Baileys,” she commented on Willow’s post. A number of fans also responded to the announcement and sent their congratulations to Willow and Ricky.

@rickyb901 and I are so excited to welcome TWO little babies into this world! Baby Baileys arriving December 2019 ❤️ 🤰🏻 #TWINS